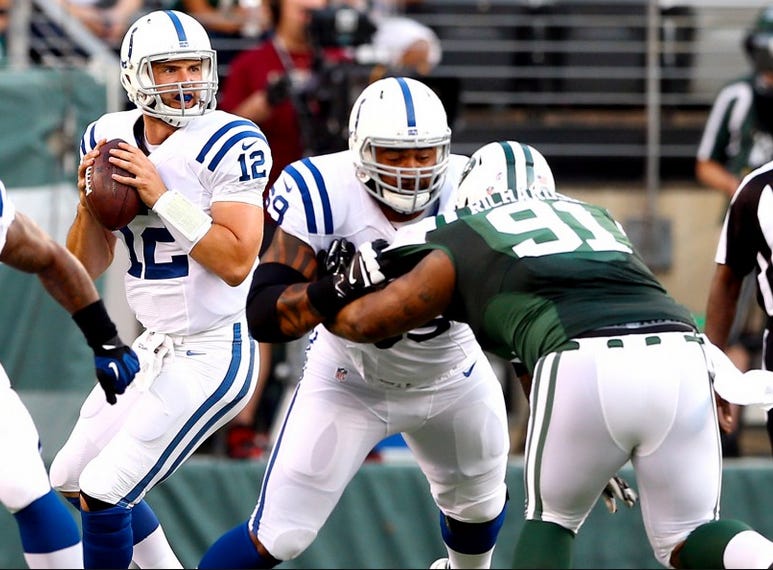 Do I hate Monday Night Football? Yes I do. Do nationally televised games always going completely horrible for the Jets? Yes, yes they do.

But do I think the Jets have a very legit shot at beating this Colts team? 100%. I think the 7 point line is preposterous. If theres one thing I can agree with Portnoy and Pats fans on, its the Colts being softer than baby shit. And with the Jets D line wreaking havoc I think Andrew Luck is in for a long, long night. Its gonna be the old Ground and Pound for the Jets on both sides of the ball with Ivory running it down their throats on offense and Beast Mo and company putting Luck on his ass all night. The difference being that they have enough other offensive weapons this season to actually capitalize when controlling the football now. In the past that Ground and Pound mentality got us nowhere. This time there’s enough talent at the skill position to put points on the board while controlling possession and the O and D lines.

Speaking of – the O Line needs to have another big game. You’re gonna have to say that pretty much every single Sunday/Monday/Thursday at this point with Fitzpatrick back there, so if thats not a given we’re fucked. It was a concern week 1 and they ended up doing a fantastic job. Needs to be replicated pretty much every week if you’re gonna have a statue like Fitz behind them. But if you can protect him and win turnovers, they win the game. Because with real receivers like Marshall and Decker and what looks like the league’s latest monster RB, they can actually score points off those turnovers now.

Do none of those things and pile up penalties and it will be just like every other MNF game where we get mortified publicly and my week is ruined for 6 straight days.