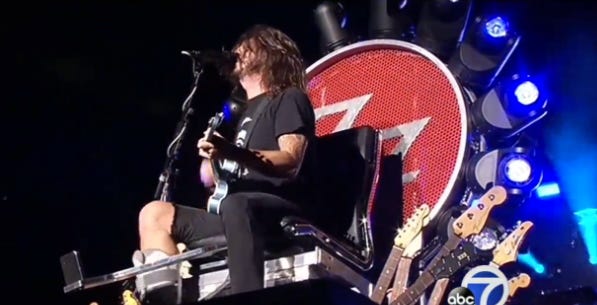 ABC7News - The afterparty got underway late Thursday night following a rockin’ fundraiser featuring the band Foo Fighters. The concert is an annual event during the massive week-long Dreamforce conference. The venue this year is Pier 70. There were about 50,000 people in the city to see the Foo Fighters. Tickets started at $500 and all money goes to help sick children. One of those kids received a special award. Lead singer Dave Grohl was in his throne with a fractured foot from a fall on stage in Sweden in June. Tens of thousands of people packed onto Pier 70 for the most anticipated night of the Dreamforce conference, but on a smaller stage, there was a bigger moment. “What’s so exciting is we’re building the best hospital in the world, UCSF. We’ve raised $10 million. I don’t think there’s ever been a night where $10 million has been raised for a children’s hospital ever before,” Benioff said.

So casual. You know when you’ve made it? When you can sell tickets for a show for $500+ and raise $10,000,000 in one night singing your songs. What a feeling that must be. As a blogger people will be like “hey I really enjoyed that blog you did” and I’ll be like woah that’s so cool my stupid fart jokes improved someone’s life. Meanwhile, Dave Grohl and the Foo Fighters get up on stage in front of 70,000 people and rock out for 2 hours and get to raise $10,000,000 for UCSF Children’s Hospital. Tomato, tomato?