Background edit: The guys getting beat up started problems inside. They wanted to beat up a Steelers. The Steelers fan walked away. The rude 49er fans started talking shit to everyone. They messed with the wrong group when they went outside and got beat up. The Guy in in red at :09 second was the one that started everything

You know when Football season starts back up and the NFL will run “Football Is Back” promos. A 25 person family comes barreling inside from a game a of touch football to sit down in the living room and enjoy the NFL together. Well that’s all bullshit because this is the real “Football Is Back” promo. A bunch of fat drunk guys with various different jerseys kicking each other’s skulls in outside of a Buffalo Wild Wings. NFL is back baby! Keep your head on a swivel or you may get your orbital socket crushed by a steel  toe boot, yes!

By the way, if anyone has ever traveled on a Football Sunday in the fall, watching a game at a Buffalo Wild Wings is always such a strange experience. In the commercials they make it seem like the whole bar is cheering for one team but in reality it’s where every out of town fan convenes. Tons of different jerseys, people cheering at random times throughout the day, half the customers depressed and pissed off, everyone eating crappy food and staring at a million different TV’s. I’m not saying it lends itself to fighting but I can understand why sometimes you need to take your shirt off and fist fight a stranger outside, let some steam off. This old guy who was kicking everyone in the face gets it. So many jorts. 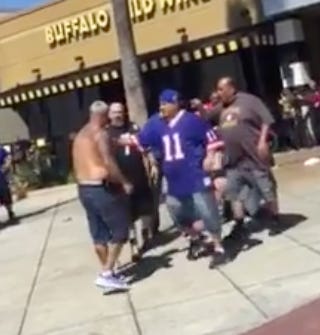