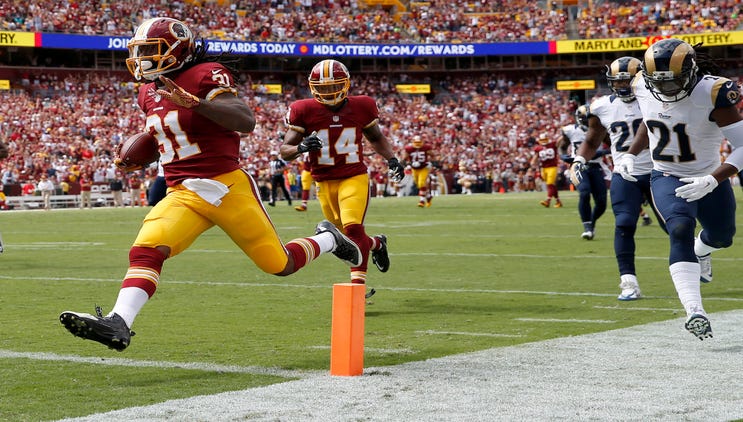 I don’t even know where to start. Great win over the Rams and that cock sucker Jeff Fisher yesterday. As I said, they needed this win to really turn the corner from the RG3 era. Last year the Rams sent out the the players acquired from that trade as captains, and then proceeded to shove a dirty sock down the Skins’ throat en route to a 24-0 victory. And yesterday the tables turned, as the Skins dominated the Rams, who were coming off a victory to the Seahawks. The Skins went into the locker room at the half up 17-0, with the Rams looking lifeless, confused, and ready to be relegated to the Canadian league.

Things that were good:

- The Oline. Bill Calahan is a magic man. Has this Oline protecting the QB, stifling defensive linemen, and giving Cousins plenty of time to make reads. Cousins was only sacked twice yesterday. Meanwhile the Oline has paved the way for the Skins to be the number 1 rushing attack in the league. 343 yards on the ground in 2 weeks, good for a 4.6/carry average.

- Matt Jones. Whooooooo? Matt Jones! The rookie out of Florida who I hope you put your waiver claim in for. Looks like he took over the starting job from Alf yesterday by playing out of his mind. Jones has all the speed and power needed to dominate in this league. He’s a bruiser, a speedster, and can catch the ball out of the backfield. Two touchdowns for the kid yesterday.

- Kirk Cousins. He managed the fuck out of the game. 23/27 for 203 yards, 1 TD, 0 INTs. That’s how you game manage like a boss. No DeSean Jackson, no problem. We’ll take 8 yards at a time, thankyouverymuch. He threw one bad ball that should have been picked, but besides that, just trusted his reads, made the safe throw, completed 85% of his passes, and won the football game.

– The defense. Nick Foles looked like a big idiot yesterday and the running game for the Rams was a smelly asshole. Through two games, the Skins defense has given up the 2nd fewest yards/game in the league, including the number 1 pass defense in the league. Yes it’s early, but it’s a great sign.

- Jordan Reed. As long as Reed stays healthy, he’s a Pro Bowl tight end. And that’s a big if, because after every play he looks like someone just shot him in the leg. He’s the most fragile player I can remember. But he added 6 catches for 82 yards yesterday, to go with his 7 for 63 from last week. He’s always open, he takes away a safety…man if only DeSean was healthy, it’d be quite the dynamic offense. Wrap Reed up in bubble wrap, he’s vital to this offense.

- Dustin Hopkins. You know what’s nice? Field position. Dustin Hopkins leg is gold. All 5 kickoffs went into the end zone, 4 for touchbacks. And he made his only field goal, a 46 yarder, with ease. Kai was consistent on field goals, and the jury is still out on how Hopkins will be, but I love his booming leg. Was awesome.

All in all, a great win. Feels weird to wake up on a Monday and feel optimistic about your football team, especially because the entire rest of the NFC East is dead. Got a short week with the Giants game on Thursday. Hopefully we’ll be waking up with Hail to the Redskins on Friday.