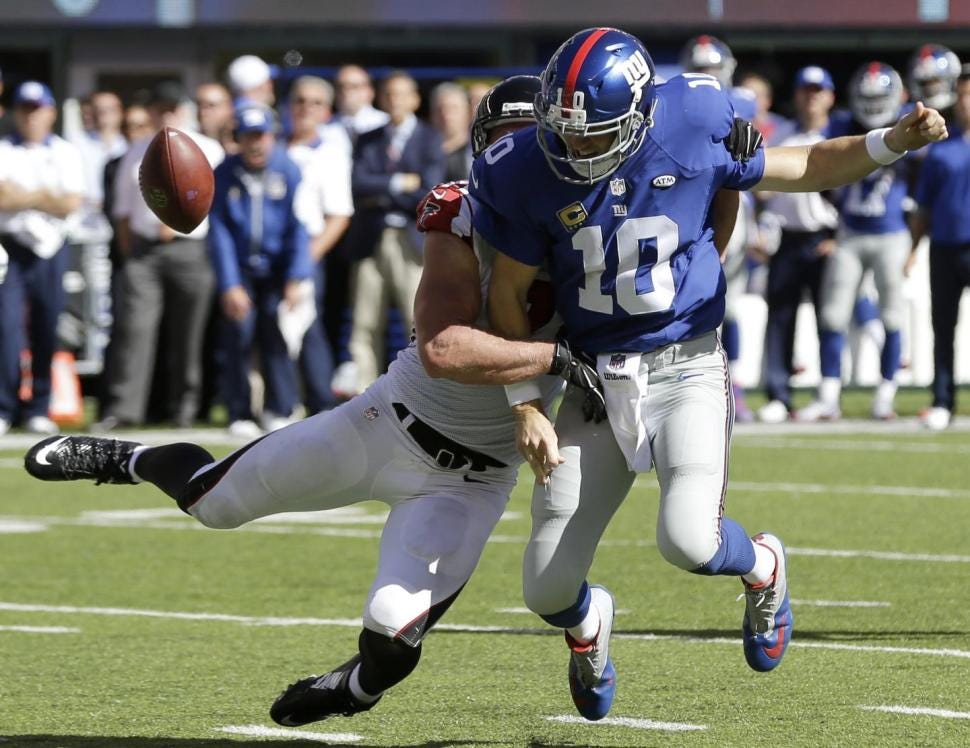 The opportunity to erase what’s been a catastrophic week for the Giants was right in their hands. Instead, with 2/3 of the game gone & a chance to take at least a 13-point lead at the Atlanta 8 yard line, Eli Manning & Big Blue doubled down on devastating losses. An Eli fumble with points all but guaranteed was the dart in the Big Blue balloon. They couldn’t regain any of the offensive momentum provided by Shane Vereen and Odell Beckham while Matt Ryan carved up the G-Men when it mattered most.
The fumble probably won’t be what’s most talked about though. Still up three with less than 3:30 left & closing in on midfield, Eli brought the offense on the field after an ATL timeout for a crucial 3rd-and-7. With the game clock stalled, somehow the Giants couldn’t get the snap off & turned a tough 3rd-and-7 into a 3rd-and-FUCK they couldn’t convert. Granted, a conversion was no sure thing either way – but with the wounds of last week’s blunders so fresh, a delay of game out of a timeout is absolutely inexcusable.
The final play of the game was such a fitting end. A 4th down incompletion off the fingertips of none other than Preston Parker. Wasn’t the most catchable ball in the world but with a drop earlier in the game and 3 last week, you gotta wonder what IS a catchable ball for Parker. I picture him getting extra work in with the JUGS machine after Giants practices & just taking ball after ball off the face. I don’t care if it’s Harris, the rookie from UCONN Geremy Davis or fucking tom Coughlin – it’s gotta be someone other than Parker in the slot Thursday.
Preston Parker didn’t lose that game though. This is another one that falls heavily on the $84M Manning. The defense isn’t gonna be mistaken for the ’85 Bears but they put the team in a position to win for the second week in a row, only to watch Eli fail to seal the deal. Again. With a short week, a banged up Flowers/DRC & the rival Redskins coming to town high off their first W, the Giants have a huge mountain to climb to salvage anything from September. If they can’t, you gotta wonder when heads start to roll.