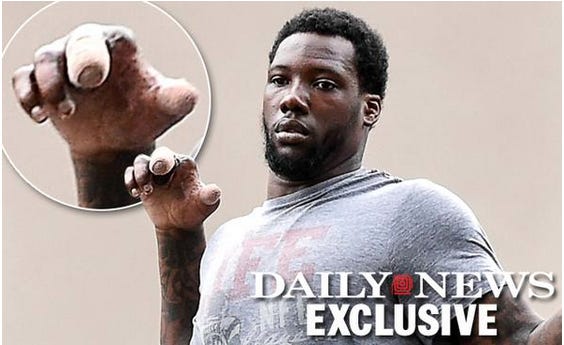 The only thing uglier than the Giants mental collapse in Dallas Sunday night were the pictures of JPP’s mangled right paw. They couldn’t have come at a better time though to divert some of the attention off the pounding Eli Manning was taking for his numerous brain farts. Eli’s proven to be unflappable though, and he’ll have every opportunity at redemption in front of his first home crowd of 2015.
Moronic play-calling & clock management aside, the Big Blue offense looked very conservative against the Cowboys. Their longest play to a receiver was just 16 yards & overall, Manning averaged a mere 5.4 yards per pass attempt. Sam Bradford, thanks in part to a 17-point halftime deficit, aired it out 52 times against this Atlanta defense for well over 300 yards so I expect McAdoo to loosen up the chains today. ODB is gonna have to rebound with a monster game though because I’ve got no faith in Randle or Parker. TC said Dwayne Harris will get more opportunities this week so hopefully the speedster can bust out a big play or two to keep Parker on the sidelines.
Defensively, the G-Men will once again be without Jon Beason against a Falcons offense that doesn’t attack the middle of the field with screens & their TE like Dallas does. Still, Romo carved them up at an 80% clip despite missing his #1 weapon. The Matty Ice/Julio/Roddy trio will be another big test for the Giants D to bend but not break as they did for much of Sunday night, and a little QB pressure against a soft ATL offensive line would go a long way. I know DaMonsta’s a high risk/high reward player but he’s gotta see more snaps. With Markus Kuhn out, it’s the perfect opportunity to slide Jenkins back to tackle & unleash arguably their most talented pass rusher.
It’s only Week 2 but today is a W the Giants gotta have. The Falcons are on a short week & certainly more vulnerable outside of the Georgia Dome. With the way they collapsed to start the year, a poor Big Blue performance at home will undoubtedly have fans & media circle back to their gift to Dallas as why they should be 1-1. Eli & Co. can put all of that to bed by showing some resiliency. A victory with the predicted NFC East punching bag Washington Redskins on deck Thursday sets this week up to be as good for the G-Men as last week was embarrassing.