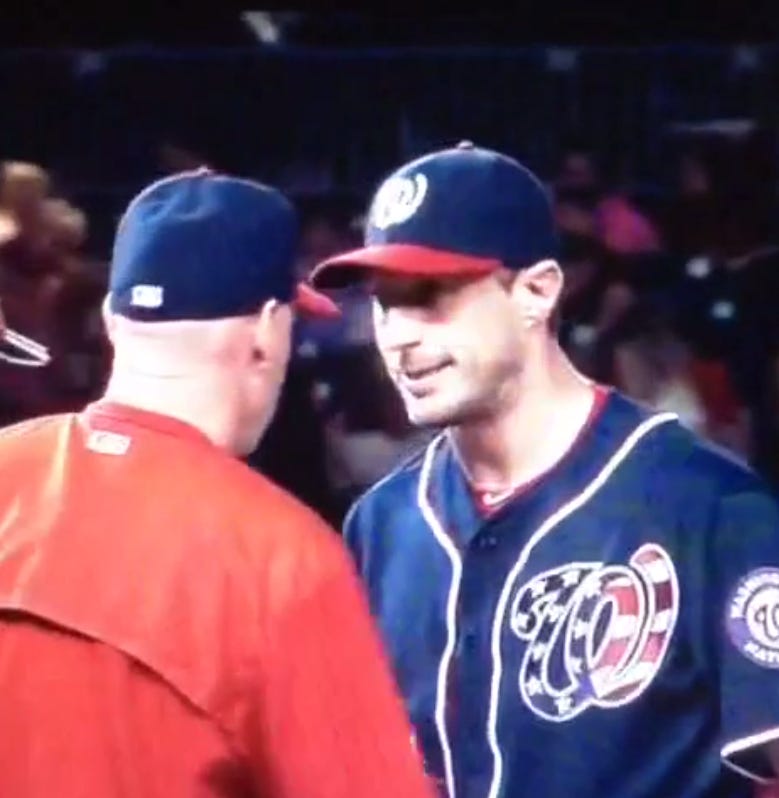 Matt Williams already should be fired at season’s end but last night’s game was the final nail in the coffin for the bald buffoon. The Nationals did get the best of Jose Fernandez and the Marlins with a 5-4 extra innings win. Clint Robinson’s homer (and hit and two walks) led the Nats offense and improved the 30 year old rookie’s stats to 14-30 (.467) with 5 extra base hits against aces like Jose Fernandez, Harvey, Greinke, Bumgarner, Cole, Kershaw, Liriano, Tanaka (according to Adam Rubin). Jayson Werth’s beautiful game winning head-first slide was a sight to be seen but, again, the major story is that Matt Williams has completely lost control and that the MW era in Washington will end in just 15 games.

Max Scherzer just turned in his 2nd straight dominant start, throwing 7 innings while allowing two runs (both off of a 1st inning homer), and is starting to prove that he fixed whatever ailed him throughout the 2nd half of the season. Scherzer’s final line wasn’t the most impressive part of his outing, it was his complete command over Matty Williams. First, Scherzer scolds MW like he was a kid that just ran into a lamp in the living room. Matt Williams absolutely crumbled beneath Scherzer’s furious multi-colored glare and was ordered back to the dugout with his tail between his legs.

Matt Williams is already a wounded animal but Scherzer was a man on a mission, he couldn’t stop and wouldn’t stop until MW’s cold, lifeless body was lowered into a tomb 6 feet beneath the Nationals’ dugout. I almost feel bad for Williams then I remember this team isn’t in the playoffs and it all makes sense.

Scherzer not acknowledging the manager there was so cold, I don’t think that even that Lord Walder Frey would approve of it.

PS: Bryce Harper’s comments in support of MW a few days ago was a nice gesture but nothing more. Williams has mistreated Harper from the start (examples include benching him for ‘lack of hustle’ or hitting him in the lower half of the order plenty of times last year) and Harper certainly knows how bad many of Williams’ decisions are. Harper voiced his support for the guy solely because he knows Williams is gone and sees no reason to further bury him.