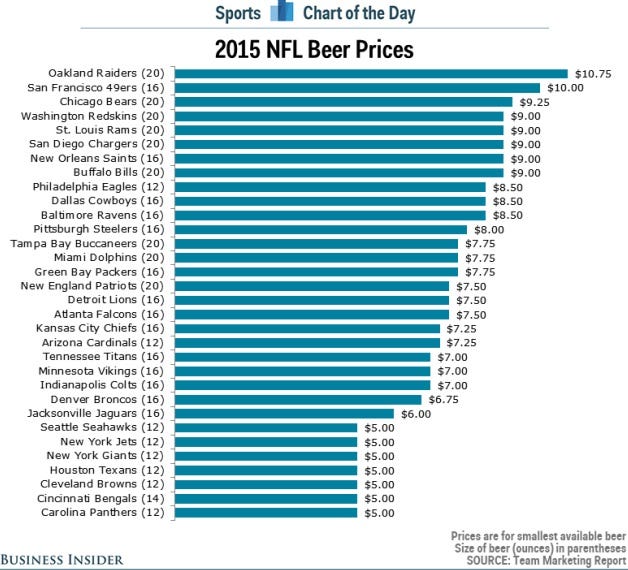 Yahoo – The average cost for a small draft beer at NFL games this season is $7.42, according to data collected from each team by Team Marketing Report. That’s actually down from $7.53 in 2014. Fans of the Oakland Raiders, San Francisco 49ers, and Chicago Bears will all have to shell out at least $9.25 for a beer at the stadiums for those teams. Meanwhile, seven different teams offer a beer, albeit at a smaller size, for $5.00. Now we get a better idea of just how expensive it is to drink beer at Lincoln Financial Field for Eagles games, where it will cost fans $0.71 per ounce — $0.08 per ounce more than any other team. At $0.36 per ounce, the Bengals’ 14-ounce beer for $5.00 is the best deal in the NFL.

HORSESHIT. Pure, unadulterated horseshit, Jeffrey Lurie. What, raking in an extra billion a year by raising the parking prices to $40 freaking bucks a pop not enough for ya? Let’s be civilized here. We’re common folk here in Philly. We don’t ask for much. To take advantage of the genetic alcoholism in our blood by realizing we will buy beer at any price is borderline unconstitutional. If the NY teams can get by on $5 a beer then there’s no excuse to be pinching pennies here. Let the big dog’s drink. No wonder more people than ever are getting tuned up to the point of blackout before kickoff in the parking lot.

20 oz’ers at football games? In Oakland, to boot? No wonder fans in the Bay Area parking lots stab first and ask questions later.