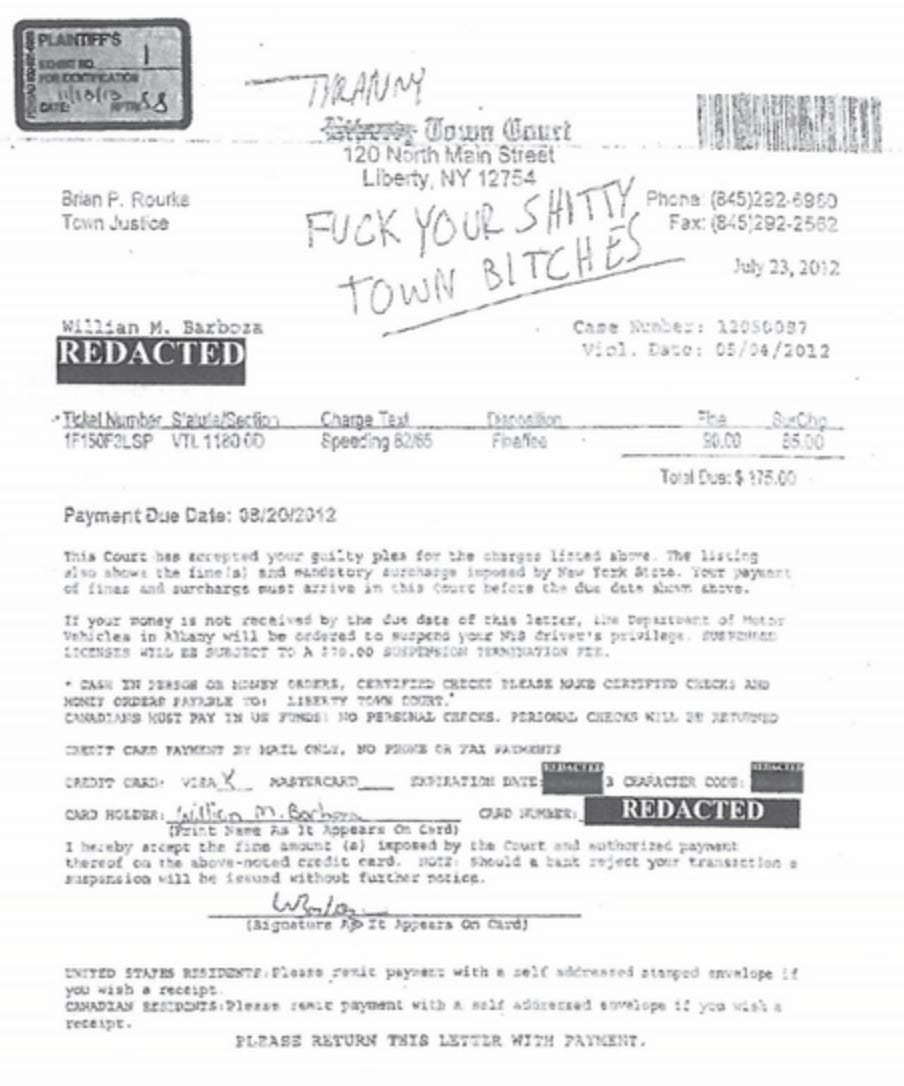 WHITE PLAINS, N.Y. — A village named Liberty must stand trial for arresting a man who wrote curse words on a speeding ticket and a prosecutor is liable for violating his First Amendment rights, a judge has decided. U.S. District Judge Cathy Seibel in White Plains ruled last week that Willian Barboza’s rights were violated when the Fairfield County, Connecticut, resident was arrested on an aggravated-harassment charge three years ago. The New York Civil Liberties Union publicized a transcript of the proceeding Tuesday. Barboza protested his speeding ticket by writing three curse words on his payment form. The message was an F-bomb insult directed at the village, according to the NYCLU. He also replaced the village’s name, Liberty, with “Tyranny.” The village, 100 miles northwest of New York City, refused to let him pay by mail after one of its clerks, who were all women, told a local judge his profane phrase, which referred to them as “bitches,” upset and alarmed them, according to court records. The judge referred Barboza’s speeding payment form to a prosecutor and ordered Barboza to appear in court. When Barboza showed up, the local judge reprimanded him for his comments on the form and told him he would be arrested, Seibel said in her ruling. Barboza was handcuffed and taken away before his release on $200 bail. Seibel said the arrest violated Barboza’s First Amendment rights, and she noted the criminal charge eventually was dismissed on those grounds. She said Barboza’s phrase was crude and offensive to some but “did not convey an imminent threat and was made in the context of complaining about government activity.”

‘Murica.  Listen I don’t pretend to know the ins and outs of the Constitution. I’m not a lawyer. I’m not educated.  I do not know my rights.  I can barely remember what I had for dinner last night.  I’m Bizarro Will Hunting.  You could make up Constitutional amendments and I’d have no idea.  So I couldn’t tell you if what this kid did was right or wrong in the eyes of the Constitution.  That’s not for me to determine.  But I’ll be damned if I’m going to live in a country where you can’t scribble, “Fuck your shitty town, bitches” on a speeding ticket.  If the judge had ruled that this kid was in the wrong and threw him in jail I’d be on the fast track to Canada right now. Dreaming of socialized health care and poutine. You can’t throw a kid in jail simply because something upsets you.  That’s not how the law works despite what Roger Goodell would say on the matter. The minute we start silencing people from telling bitches how fucking shitty their town is then all is lost. Because who knows.  Maybe that town is shitty and we can’t gag those who speak the truth.