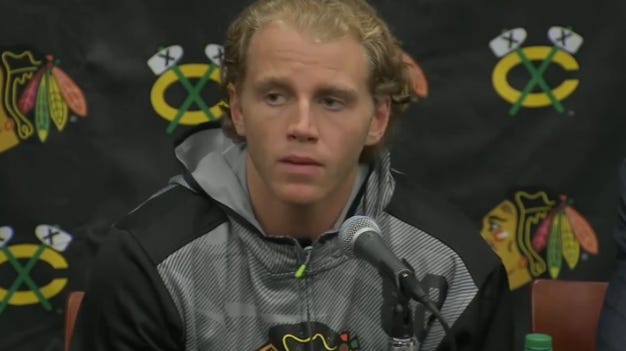 (Source) Patrick Kane spoke publicly for the first time since his involvement in an alleged sexual assault, saying:  “I am confident once all facts come to light I will be absolved.” Earlier Hawks President McDonough confirmed that Kane will participate in the team’s training camp. “We recognized that Patrick Kane is dealing with a very serious situation,” McDonough said at Thursday’s press conference. Kane had not spoken publicly since police in Hamburg, N.Y. began investigating him for an alleged sexual assault. Coach Joel Quenneville, general manager Stan Bowman are all expected to talk to reporters.

Practices at the preseason training camp are open to the public, meaning Kane would inevitably face questions from news reporters if he attends. Kane, 26, has not been charged with any wrongdoing, and he has not spoken publicly about the allegations.

The Tribune reported that attorneys for Kane and his accuser are seeking a settlement that would end a criminal investigation into Kane. Meanwhile, prosecutors in western New York are preparing to send the case to a grand jury later

I see both sides of this. On one hand Patrick Kane still has not been charged with a crime, so the organization having his back makes sense throughout this process. He has a right to be at camp and there is a legal process that needs to be seen all the way through before Kane can say anything of substance. I get it, I think everyone gets it. So with that in mind, it still baffles me why the Hawks trotted him out there today. Dan Bernstein tweeted that it is similar to the Corey Crawford thing where the Front Office is pissed off and basically makes the player take his medicine and feel awkward in front of the press. But that seems backwards when you think of the scorn and heat this move brings to the organization on a whole and Front Office in particular. If you’re “punishing” Patrick Kane here you’re also making yourself look like a total buffoon.  The Hawks had Kane read a statement, then he sat there and said “I appreciate your question but I can’t answer it at this time” over and over and over, then John McDonough took the mic and immediately jumped into championships and success talk like nothing had ever happened. How fucking tone deaf is that? To basically go from the awkward charade of “Making Patrick Kane available to the media” even though he can’t actually say anything about the alleged rape, to waxing poetically about the Blackhawks success. Idiotic. Braindead.

Look this is not going to be easy no matter how it goes down. Everyone needs to realize that, but this just made it even harder. If Kane is at camp you release a statement, keep him away from the media because he can’t say shit anyway, then trot your front office out there to answer questions about his attendance and maybe then after all that is done you go into the other stuff. You can’t just throw Kane out there, have him say nothing and then go on like nothing occurred. This is 2015, people aren’t dumb, they have the internet, they have informed opinions and a detailed understanding of every move an organization makes and judging by the reaction of the Chicago media, all that goodwill from the last half decade is out the window just like that.