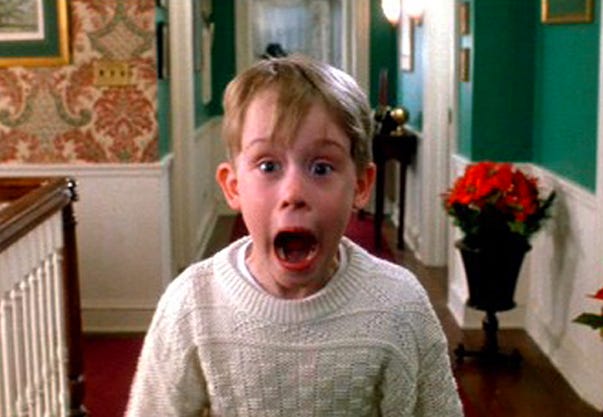 USA Today – Do you guys give up or are you thirsty for more Home Alone? The 1990 holiday hit film starring Macaulay Culkincelebrates its 25th anniversary this fall and returns to select theaters for two nights Nov. 8 and 11. The presentation by Fathom Events and Twentieth Century Fox also features a special introduction exclusive to the celebration. Directed by Chris Columbus and written by John Hughes, Home Alone starred Culkin as Kevin McAllister, an 8-year-old who gets left behind when his family departs for a Christmas vacation and has to singlehandledly fight off a couple dimwitted burglars (Daniel Stern and Joe Pesci) trying to rob his house. The cast also features Catherine O’Hara, John Heard and the late John Candy. Home Alone garnered two Academy Award nominations and was the top-selling movie of 1990 with a box office of $285.8 million. Tickets for the Home Alone 25th-anniversary shows and a list of participating theater locations are available at FathomEvents.com.

2) A huge erection in my pants.

Yup, thats right. Dick hard for Macauly and Marty. Can you imagine how awesome its gonna be to be theaters and hear the “doo doo doo-doo-doo, doo doo doo-doo-doo” holiday music jingle in the beginning of the opening credits? Hear all of Marv’s screams in THX sound? Watch Kevin roll out his blue print on a huge full sized screen? I mean just imagine how fucking big that nail going through Marv’s foot is gonna look. I dont have any memories of being in the theater for Home Alone the first go round so this is really the first and only time for me. So yes, I’ll be a 30 year old man, wearing my Barstool Home Alone t shirts, paying money to go to the theaters to see Kevin McCallister foil Marv and Harry for the 250th time.