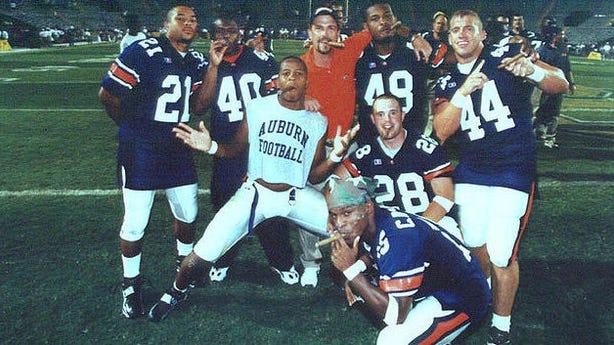 AL – Tommy Tuberville wanted his 45th birthday to be extra special. Auburn’s first-year head coach was just starting a rebuilding project. The Tigers had not won an SEC road game in more than a year and Tuberville needed another incentive to motivate his new team.

A road trip to LSU was circled on his calendar.

The prize proved important for the program, whose previous season was marred by injuries, the resignation of head coach Terry Bowden and a three-win season. Unrest had settled and Tuberville needed to bring his players together.

Tuberville was already 2-0 as Auburn’s coach, but the wins were not impressive. His Tigers nearly fell behind two touchdowns to Appalachian State, a Division I-AA school, before winning by a touchdown. The Tigers then defeated Idaho 30-23. Auburn entered the third week of the season as a nine-point underdog at LSU.

Tuberville identified the early-season trip as an opportunity.

Tuberville labeled it as Auburn’s “Cigar Game” in preseason camp, but little did he know the simple motivational tactic would set in motion a string of missteps and failures in Baton Rouge, La., where “Death Valley” became an impervious setting for future Auburn teams.

First of all this is a great account of Auburn’s “Cigar Game” and how it defined the LSU rivalry from AL.com writer Brandon Marcello so check out the whole thing here when you have a chance. But can you guess the part that jumped out at me?

It wasn’t all fun and games, however. The NCAA fired off a nasty letter to Auburn and threatened to declare players ineligible if they did not fork over $1 a piece for receiving improper benefits (one cigar).

“We gladly went through our couches and found the change,” Leard said.

Tuberville never used cigars as a prize for players again.

Just a neat reminder that the NCAA being gigantic pains in the ass isn’t some new phenomenon. It’s not some cause du jour that is only around because it’s the internet and social media age where every asshole with a Twitter account (read: me) hammers the point home all the time. The NCAA was the NCAA even back in ’99.

Seriously think about it for a second, really think about it. Think about the pettiness of contacting the Auburn football team and demanding $1 be paid by each player who smoked an impermissible cigar or else they are ineligible. 1 single dollar. 100 cents. 4 quarters. I want you to really take the fact that this happened in and digest it so you know what we’re dealing with here. It’s insanity.