It takes a lot for me not to immediately despise someone with a voice like this lady making a public spectacle of herself like this. But I have to say as I watched the video, I grew to admire her because she was so steadfast in her convictions and didn’t back down even as another surly lady in an SUV threatened to run over her. How can you do anything but respect this casual pose while she matter-of-factly declares “she’s running me over”? 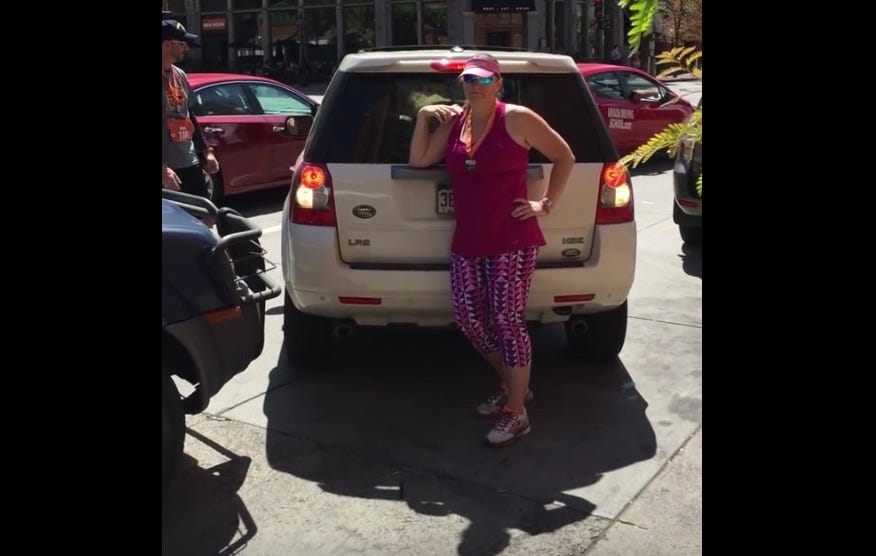 It’s one of those situations where this chubby chick in athletic attire would not be beaten on this day. Really the only play was if the guy getting out of the other car is with the parking spot lady, that’d be a good moment to “feel threatened” and respond by Wile E. Coyote pancaking her. And even in those circumstances it’s probably a “crime” or “vehicular manslaughter” in the eyes of a court so that might not be worth the 15-minute parking outside of a dry cleaner. So basically if you’re the lady in the SUV, you have to accept defeat. Sometimes in the game of life another person checkmates you at every turn and it’s not worth it to do anything but take the L.

Also my respect for her commitment aside, I love how obviously “new to Colorado” the angry shouting chick is. You’re in the most relaxed state in the US with legal pot at every turn and you’re there with your fat gut in your brand new athletic gear and visor with tags still on them and your cross trainers with the tread as fresh as they came out of the box yelling at another woman in a two-ton piece of machinery over a parking spot. You might as well have a flashing neon sign saying “I just moved here from New Jersey for an office administrator job.” They should legally be allowed to run this girl out of the state with torches and pitchforks when this video goes viral. It’s impossible to be less cut out for Colorado than this lady.