BEVERLY HILLS (CBSLA.com) — A dangerous incident involving an alleged street race in Beverly Hills was caught on video, but police say they may not be able to take action. Witnesses recorded the Saturday afternoon incident, which broke out on quiet residential streets, and involved a yellow Ferrari and white Porsche. Eventually, the Ferrari was seen smoking after reportedly doing burnouts. It returned to a home in the area. Journalist Jacob Rogers says he tried to ask a man why they were racing and endangering lives, but the man cursed at him and told him to get off the property. When Rogers tried again another time, he says the man said, “’F-America’ and he threw a cigarette at me and that was before he indicated he could kill me and get away with it.” Police say the men are from Qatar and may have diplomatic immunity, meaning they cannot be arrested in the U.S. because of an agreement between the two countries.

Couple quick thoughts. First of all dropping the diplomatic immunity card in somebody’s face quickly followed by “if I wanted to murder you I could and I’d get away with it” is as big a power move as they come. You sort of have to respect it. Second these guys are clearly terrorists and have turned into Government rats. Anybody who has watched 1 movie could figure that out. See this is the thing about terrorists. They talk all this mumbo jumbo about being righteous and shit, but they love fast cars and fast women just like the rest of us. Being a terrorist is all fine and dandy till you get a taste of the good life.

Anyway last point here. There is only 1 person and 1 person only this Beverly Hills Community can turn to right now. Oh the cops can’t help you? These terrorists have diplomatic immunity? Well nobody is immune to Bieber. Beverly Hills is his turf. He’s the only one who drag races Lambos in Beverly Hills and gets away with it. I smell a severe egging coming on the horizon. Funny how life works isn’t it. And in their desperation, Beverly Hills turned to a man they didn’t fully understand. 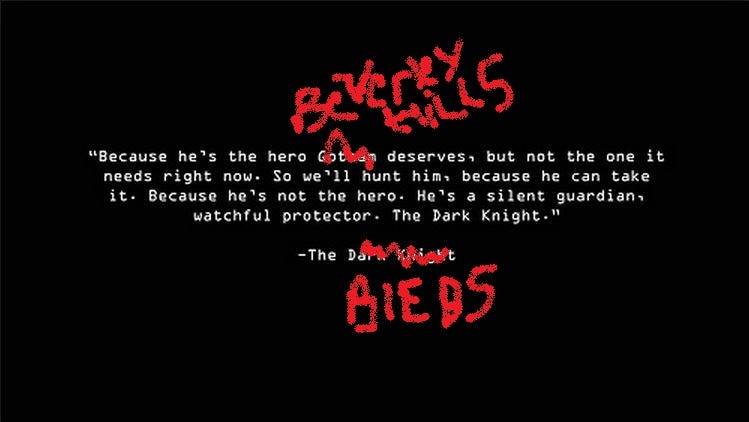