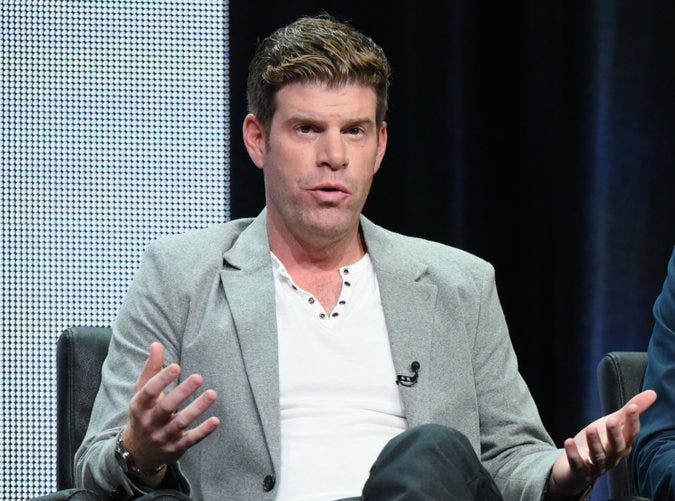 NY Times - When the comedian Steve Rannazzisi has explained his success, which includes seven seasons starring on a popular TV show, “The League,” and a one-hour special this Saturday on Comedy Central, he has frequently attributed it to decisions he made after narrowly escaping the World Trade Center attacks on Sept. 11, 2001. In elaborate detail, Mr. Rannazzisi, 37, has described working at Merrill Lynch’s offices on the 54th floor of the south tower when the first plane struck the north tower. “I was there and then the first tower got hit and we were like jostled all over the place,” he told an interviewer in 2009. He fled to the street just minutes before another plane slammed into his building, he said, and decided that very day that life was too precious to waste opportunities. So he abandoned his New York desk job to pursue a career as an entertainer in Los Angeles. Nonetheless, he said, he remained affected by his memories of that day. “I still have dreams of like, you know, those falling dreams,” he told the interviewer. Confronted this week, though, with evidence that undermined his account, Mr. Rannazzisi, after a day of deliberation, acknowledged on Tuesday that his account was fiction. Actually, he had been working in Midtown that day, and not for Merrill Lynch, which has no record of his employment and had no offices in either tower. “I was not at the Trade Center on that day,” he said in a statement provided by his publicist, Matthew Labov. “I don’t know why I said this. This was inexcusable. I am truly, truly sorry.” It was unclear how Mr. Rannazzisi’s admission might affect his standing with networks or sponsors, including Buffalo Wild Wings, which had made him the face of an ad campaign associated with the start of this N.F.L. season and which had featured him in commercials last spring for March Madness. “We are disappointed to learn of Steve’s misrepresentations regarding the events of September 11, 2001,” Buffalo Wild Wings said in a statement Tuesday night. “We are currently re-evaluating our relationship with Steve pending a review of all the facts.” Mr. Rannazzisi, who declined requests for an interview, said in his statement that, once he had lied, he could not figure out a way to undo the damage. “For many years, more than anything,” he said, “I have wished that, with silence, I could somehow erase a story told by an immature young man. It only made me more ashamed. How could I tell my children to be honest when I hadn’t come clean about this?” His interviews, though, several of which remain posted on the Internet, show that a decade after the Sept. 11 attacks, Mr. Rannazzisi was still relating a harrowing experience. In a 2011 interview on the podcast “Sklarbro Country,” Mr. Rannazzisi said that he had gotten a good severance package from Merrill Lynch and that he clearly understood that Sept. 11 was a sensitive topic. “I’ve spoken about it before,” he said. “I just don’t ever want to feel like, anyone, I am cashing in or anything like that.”

As for his Sept. 11 account, Mr. Rannazzisi gave a detailed version to the comedian Marc Maron on his podcast in December 2009, saying he had worked as an account manager for Merrill for a year and a half and had been watching from the street when the second plane struck. “I couldn’t tell exactly where it went in,” Mr. Rannazzisi said. “So, I called up to the office, and it was pandemonium. They were like, ‘We are on our way down, we are on our way down.’ ” Mr. Rannazzisi had noted in some interviews that his girlfriend also worked in the south tower on Sept. 11 on the 24th floor, but said that she had been delayed and never made it to the building. (Actually, Mr. Rannazzisi got that wrong as well. Mr. Labov said on Tuesday that Mrs. Rannazzisi was scheduled to work as a temp on Sept. 11, but in the World Financial Center, nearby, not in the south tower.) When they both got home, he said on the podcast, they decided they would move to Los Angeles. “We went up to the roof of our building, we smoked a joint and then decided we are going to leave,” he said.

Well, here’s a pretty shitty story about a dude who I think most people would like. I would look at this dude and be like “Oh yea, thats the guy from the League! He does those Buffalo Wild Wings commercials. I like that guy.” And now I’m just gonna think of him as a scumbag liar who ran around telling people this elaborate lie for really no goddam reason. Intricate details about where he was and phone calls that were made and where his girlfriend was and Merril Lynch Severance Packages and, nope, none of it true. Straight up Brian Williams’d it. Its actually pretty remarkable. To be that deceitful over and over again on podcasts and interviews and shit. Have all the listeners ooh’ing and ahh’ing and putting themselves in your shoes and feeling sick to their stomachs about how awful that day was and now almost fifteen years later you’re just like “Nah! JK!”

I mean listen we’ve all been caught in a major lie before. We’ve all overcommitted to a story that never actually happened and there’s really no turning back. We’ve all been George Costanza in the car driving to his house in the Hamptons. “You wanna get nuts? Come on, Lets get nuts!” As a matter of fact I have my own dirty little secret like that. I was at the Mets game when Robin Ventura hit the Grand Single. I was 14 years old at the time and I was at the game with my mom. She made us leave in the 13th inning. I was fucking furious with her at the time but I had no choice. I was 14. We actually heard that walk off in the car. And for the past 15 years I’ve been lying about it. I’ve told literally everyone that I was at that game. I’ve lied about it so many times I now believe I was actually there. I have no memories of listening to it in the car, only memories I’ve concocted in my head about celebrating the walk off inside of Shea. Never told anybody about that until now.

The one minor difference here is that I am just telling a story about a sporting event when I was a young boy and this dude is lying about the worst terror attack on American soil. I was embarrassed to have left a sporting event early, he was blatantly lying about a story where a few thousand people died for attention. I mean its one thing to come back from summer camp and tell your friends you lost your virginity when you didnt. Its one thing to tell your buddies you did 20 shots and drank 30 beers. Its another thing to make up a story about you witnessing the Twin Towers falling, man. Nothing to gain other than people feeling sorry for you and giving you attention. A real shitty move and a real shitty story. Sucks that it came from what seemed like a pretty likable guy too.