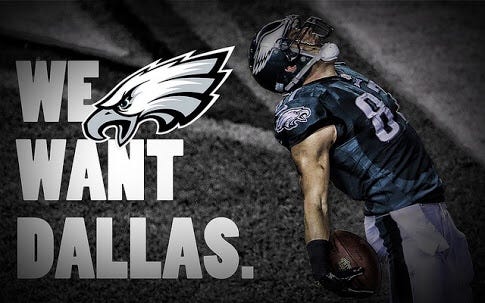 LOVE the Eagles wearing white on Sunday, and thus forcing the Cowboys to wear the Blues they HATE to wear. Love it.

Backup C and Michigan Man David Molk, who started 4 games last year, has been put on season ending IR with a torn bicep.

The entire national media has collectively broke their shit hopping off the Eagles bandwagon. Good. Hated them being the sexy pick.

Birds bringing back the V.

Sam Bradford was the one who grabbed the sack to rally the troops and give a halftime speech when down 20-3.

This will never get old. Ever.

It was called nullfied to a soft illegal contact call on Kiko Alonso, but this sack shows just shows that Fletcher Cox is one filthy beast.

Bryce Brown has been cut by the Bills. Another great GM play by Chip getting a draft pick for him while he could.

We’ll end with EatDatPussy445’s totally irrational, blowharded, heart on his sleeve reaction to Week One’s loss to Atlanta. I don’t like it, but dammit, I respect it.