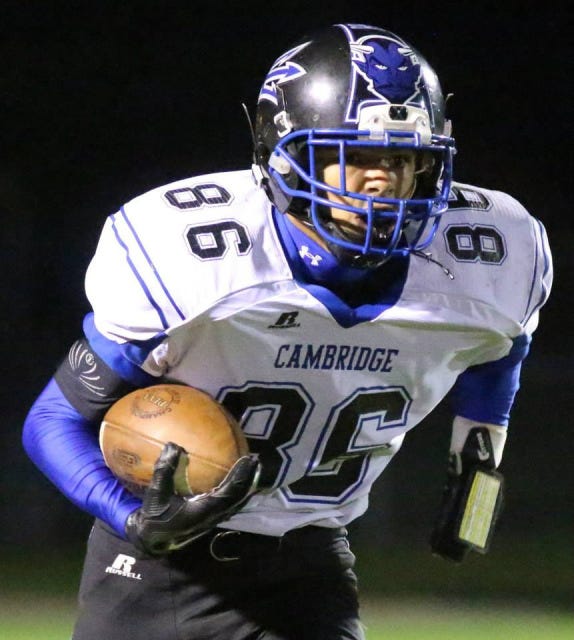 USAToday – “It was just some sort of birth defect,” Kris Silbaugh said. “Nothing was wrong. It has never stopped me. I just don’t let it; never have.” Be clear: Silbaugh isn’t “good for a guy with one hand” he’s downright dominant. Last Friday, Silbaugh became Cambridge Springs’ all-time receiving yards (915) leader when he snagged a 43-yard touchdown catch during a 63-0 win over Saegertown (Saegertown, Pa.). “I knew I was close to it last year, but I had forgotten about it,” Silbaugh said of breaking the previous record of 912 yards from 1998. Coming up, Silbaugh always wanted to play football, but, admittedly, let his fear “of what people would say” halt those plans. He internally struggled with the “why me” questions but kept his feelings bottled up. “I never wanted anyone to pity me,” Silbaugh said. “I hate that feeling.”

I’m not even going to judge the fact it looked like none of his catches were in traffic and the all-time receiving yardage for this pip high school is a measly 912 yards, this kid is impressive. Anyone with 4.4 speed at a high school level can absolutely burn, but to break receiving records with two hands is a feat at any level. Kris Silbaugh is doing it with one hand and a sticky club. I had trouble pulling in grabs with all my limbs in tact and here’s this kid acting like Jerry Rice out there with just one working mitt. The best part is he’s doing it all with a slice of humble pie. Play on, kid. Play on.