I ended up putting a few variations on my lineups into the Millionaire Maker, but in the end it was my optimal lineup that scored the best. Let’s break it down:

-Bradford, Lacy and Davante Adams were my featured blog picks that I was 100% sure I would be rolling with. I went with my #2 choice at TE over Greg Olsen because of salary, and it worked out in my favor (Olsen had a total dud). Jordan Matthews was also one of my mid-tier recommendations that I felt good about pairing with Bradford, and it paid off.

-Speaking of Bradford to Matthews – I didn’t tweet about it or anything because I didn’t want to be “fantasy football guy”…but are you f’ing kidding me with that OBVIOUS touchdown that the ref standing RIGHT NEXT TO IT missed? And then not challenging it? That’s a TD pass, a TD catch, and some passing and receiving yards that we didn’t get that would have bumped my lineup to the next cash point. So frustrating.

-Jarvis Landry was the one I was most unsure about. He’s always a great, safe PPR player, but doesn’t usually have the upside you need in a tournament. A really solid game and a punt return touchdown changed all that.

-Had my eye on the Jets D from the second I saw “Cleveland Browns” on the schedule. Easy play for me.

-The good about my lineup: it cashed, and 165 points is a good score for week 1.

-Some problems with my lineup: too many chalky and popular picks. All my guys were 15-25% owned which is good to maybe double or triple up your entry, but not to take down any big money in a huge GPP like the Millionaire Maker. Need to get a little more contrarian this week.

Speaking of this week, let’s get into some picks.

Just a reminder, I only play tournaments, so these are primarily GPP picks – not necessarily my list of the 4 guys I think will have the 4 top scores of the week. Obviously I could just list guys like Aaron Rodgers, Julio Jones and Gronk every single week, but that shit is boring. 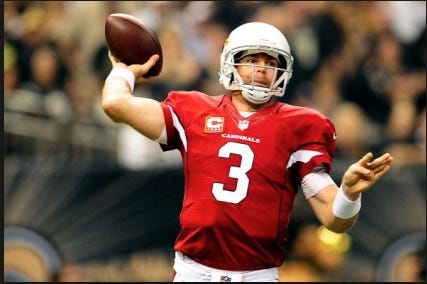 29 fantasy points last week, price stayed very low and now he’s facing the Bears defense almost certainly without his starting running back (who, even if he miraculously plays, will be way below 100%). We’ve got a nice little 46 point total on this game, so unless you think Chris Johnson is going to revert to 2009 CJ2K, you gotta imagine Carson is going to be airing it out. Anything less than 35 pass attempts and 3 TD will be disappointing to me.

*This Bills/Pats game is super interesting to me. Normally this would be a great spot for the Bills – they always play New England tough and this is basically their Super Bowl now that Rex Ryan is there getting them all hyped up. BUT I still don’t know how to judge this Pats team coming off Deflategate and Spygate and Brady and Belichick in fuck-you mode. So that call is up to you. 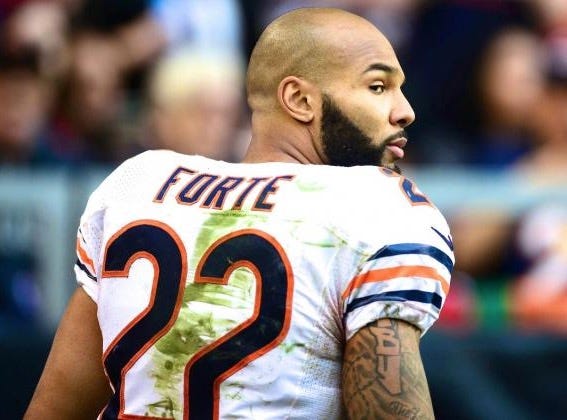 This might be a little chalky because he’s tied for the top price, but sometimes that’s a good thing? People tend to look for value plays so obsessively that they forget that sometimes the best option is priced accordingly. Who knows, maybe I’m wrong and he’ll be 30% owned, but after seeing how much the Bears incorporated Forte in the offense last week, and knowing how beat up their WRs are, I like Forte in this spot.

A lower cost option if that’s too pricey for you: Justin Forsett hitting up that gross Raiders defense. A poor Week 1 and a shoulder concern will most likely keep his ownership % down.

A much lower cost option: Carlos Hyde is obvious at 5.1K. So why isn’t he featured? Because he’s too obvious. He’s no doubt a great play and will make his way into at least one of my lineups, but everyone will be on him. 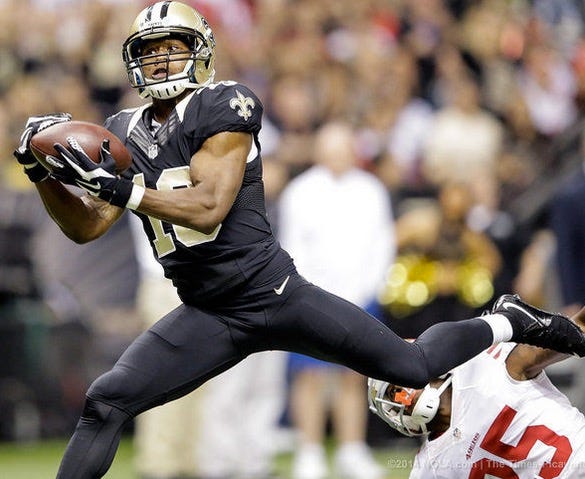 Cooks had a disappointing week 1, and that’s EXACTLY why I love him this week. Hoping that a low score combined with his price staying the same will keep a lot of people off of him. But you saw what Marcus Mariota making his first start ever did to this Bucs defense in just 1 half last week – now imagine what Brees can do? And Cooks is his #1 target that they want to feed the ball to, so using some basic logic, I love the play.

Good luck on Sunday. Got any sweet sleeper picks I should consider? Tweet them at me. Anybody that hits on an awesome sleeper I’ll put your tweet in the blog next week and get you some street cred. Also if you enjoy the blogs and want to deposit on DK for the weekend use my referral code and we’ll both get a ticket to the Millionaire Maker.