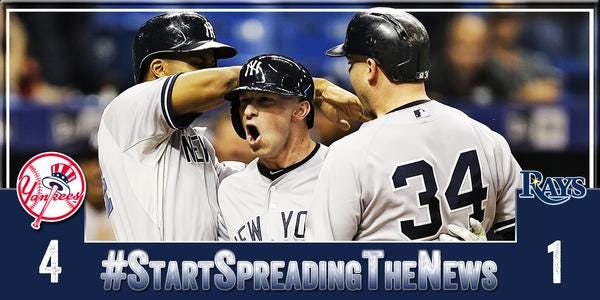 Huge win last night for a team that looked absolutely dead for basically an entire game. There were times where all of KFC’s tweets about the Yankees not making the playoffs were creeping into my thoughts. I was really worried that we were watching a collapse of Mets proportions. But then in the ninth inning the best player on the team stepped up to tie it. Slade Heathcott with a 3 run ninth inning home run to give the Yankees the win.

Now I’m not going to say that the Yankees season is totally turned around but at the same time, sometimes this is all it takes. Yeah they were almost no-hit yesterday but with the amount of young guys in the clubhouse who got called up in the last few weeks, maybe their excitement can become contagious for the older guys who have looked dead. Literally dead. Like corpses on the field. Baseball is a children’s game and when most of your team is on the wrong side of 30, that can get lost. Buy you mix in a guy like Heathcott and Serevino getting some positive results, things could be turning late for the 2015 Yankees.

The key to turning things around is going to be not wasting good starts by our starting pitchers. Last week Tanaka gave us 8 innings in a loss and last night CC went out and earned his paycheck but almost had nothing to show for it because we were getting no hit by a nobody. The last 2 years I have written at this time of the year: when the playoffs were still in reach, it seemed like no one on that field wanted to be an MLB player. So I’m hoping a youth movement or really anything else will make it so I don’t have to do that again. For 26 outs last night we looked dead, so we’re lucky to get 27 outs in a game.

PS: I’ve been saying for a while this team needs to get in a fight to build some team unity and show some fire, and maybe Heathcott is the man for the job.