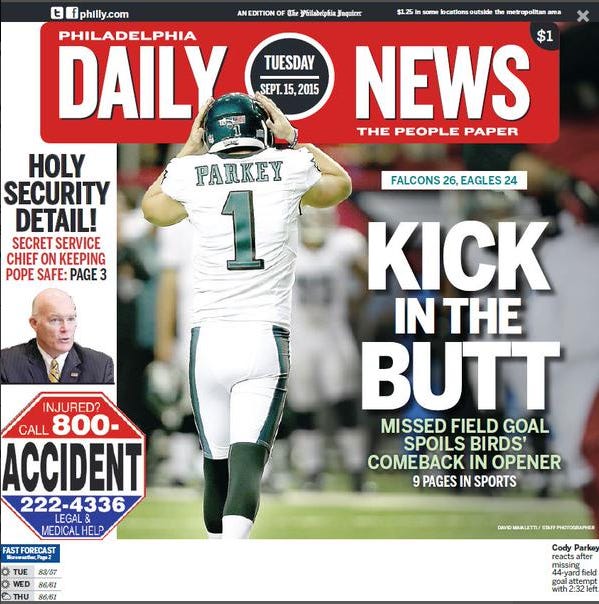 There’s so much blame to go around, but please, please, PLEASE don’t let this one ride on Cody Pakey’s shoulder’s for pushing that 44-yard FG with 2:30 left like the freaking Daily News here. Shit happens. Should he have made the kick? Of course. It’s the NFL and that’s no chip shot, but that should have been money. Matt Bryant (who NEVER misses against the Eagles a la remember that 62-yard miracle pooch at Tampa Bay a couple years back? Fuck that guy.) had no issues making his dozen FG’s with ease last night. You gotta make that kick on the line. And don’t give me this Chip Kelly should have went for it on 4th and 1 on ATL’s 29, down 2, with 2:30 left in the game. This isn’t Madden, and can you imagine the UPROAR if he would’ve went for it and failed? You take the points in that situation, period. If anything Chip should of maybe called a TO and not dilly-dallied in making a decision to kick (not too sure how you can say he was rushed when he still had 7 seconds on the gameclock left to kick it, but whatever). Also, please don’t give Jordan Matthews and his 10 catches for 100+ yards heat for having that ball go through his hands for the game ending INT, either. Yes, it would be nice to have actually clutch players who make big plays in huge moments like EVERY OTHER TEAM, but it should have never gotten to either point. This game falls solely on Chip Kelly and DC Billy Davis for not getting their team ready to play from the opening whistle.

There’s so much individual blame to go around. The million and one penalties. Malcolm Jenkings dropping his first 2 of 20 guaranteed INT’s right in his breadbasket this season. Byron Maxwell channeling his inner Bradley Fletcher. But when it comes down to it, you know what’s better than outscoring your opponent 21-6 via great halftime adjustments? Fucking not getting your dick kicked in 20-3 in the first half. The Falcons, who won’t be better than 8-8 this season, came out and took the Eagles behind the woodshed. They came to play in every aspect of the game, we didn’t. There’s no other way to look at it.

And I need a quick word on Byron Maxwell who, yes, did play like tainted taint:

Let’s all relax on him, too. Byron Maxwell was overpaid because he had to be for the Eagles to land him, but he was never expected to be a Revis or what Nhamdi was supposed to be – a true blue lock down #1 cornerback you can put on an island. He still needs help with the Thoroughbreds that are Dez, Megatron, and, YUP, Julio Jones. How about a little help over the top after the 30th catch in the first quarter, Billy Davis? Maxwell is no Bradley Fletcher, but dammit, the lack of help and adjustments were so similar to when Dez Bryant ravished the Eagles last season it hurts.

More later, obviously, but let’s be civilized when looking at this mess. But, seriously, they need to fix all this shit before Sunday. This is Dallas week, dammit. And falling 0-2 to a Dez Bryant-less Dallas team at home (while the Cowboys move to 2-0) would be a borderline season ending game…in Week 2. I hate everything.