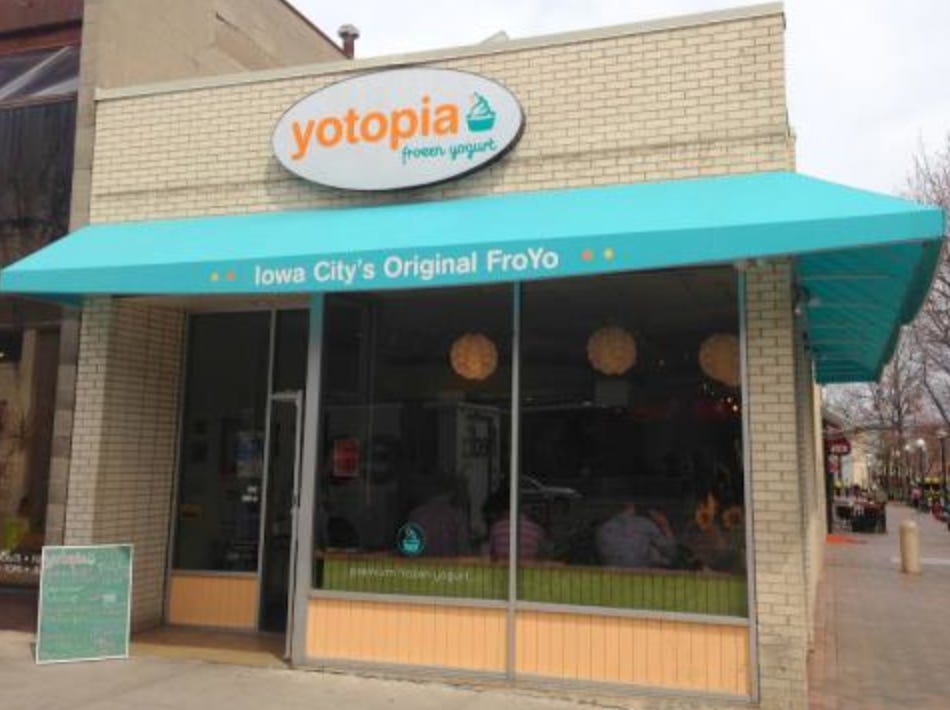 The Smoking Gun- An intoxicated sorority leader was arrested early Saturday night after she urinated on the floor of a frozen yogurt shop near the University of Iowa campus, police report. Cops were called to Yotopia–which bills itself as “Iowa City’s Original FroYo”–after a woman relieved herself inside the business around 7 PM. Officers identified the suspect as Jestine Rands, a 20-year-old University of Iowa student. Rands, cops reported, smelled of booze, was “slurring her speech,” and had “bloodshot watery eyes.” Rands, who had an empty flask that smelled of alcohol, allegedly gave cops false information, claiming that her driver’s license was actually that of a friend. Pictured at right, Rands, a Nebraska native, was arrested for public intoxication, a misdemeanor.

The 7:00pm part of this story is important.  This young lady was clearly drinking downtown during the Iowa/Iowa State game on Saturday.  Kick off was 3:45 so she must’ve been stumbling home, wanted some froyo, needed to piss and decided to kill two birds with one stone.  Makes total sense to me. I will say this in terms of her arrest, it’s not fair.  It’s not fair at all.  There needs to be a public intoxication amnesty period around downtown Iowa City for 2-3 hours after an Iowa football game ends.  Those need to be extended by an hour when it’s a game against Iowa State in which we emerge victorious.  Let the kids run wild for a few hours and enjoy a win over an in-state rival.  It hasn’t happened often around here.  Let some things slide.  And yes, the amnesty period must allow pissing on the floors of frozen yogurt shops.  It just has to.  You simply can’t hold Iowa students accountable for their actions under those circumstances.  I know this yogurt place.  I’ve been there.  It’s less than a stone’s throw from 20 bars where thousands of kids watch Iowa football games every Saturday.  It’s chaos in that area before, during and after games.  Some crazy shit is gonna happen.  Give’em a break.

PS- GASP.  Sorority girls drink?  Since when?  Those people who were outraged at Alpha Phi’s bid day video last week have to be beside themselves right now.  They couldn’t believe those girls had the audacity to claim they drink in college and now we’ve got a blacked out sorority girl pissing on the floor of an eating establishment?  Well the world has just gone fully insane now.