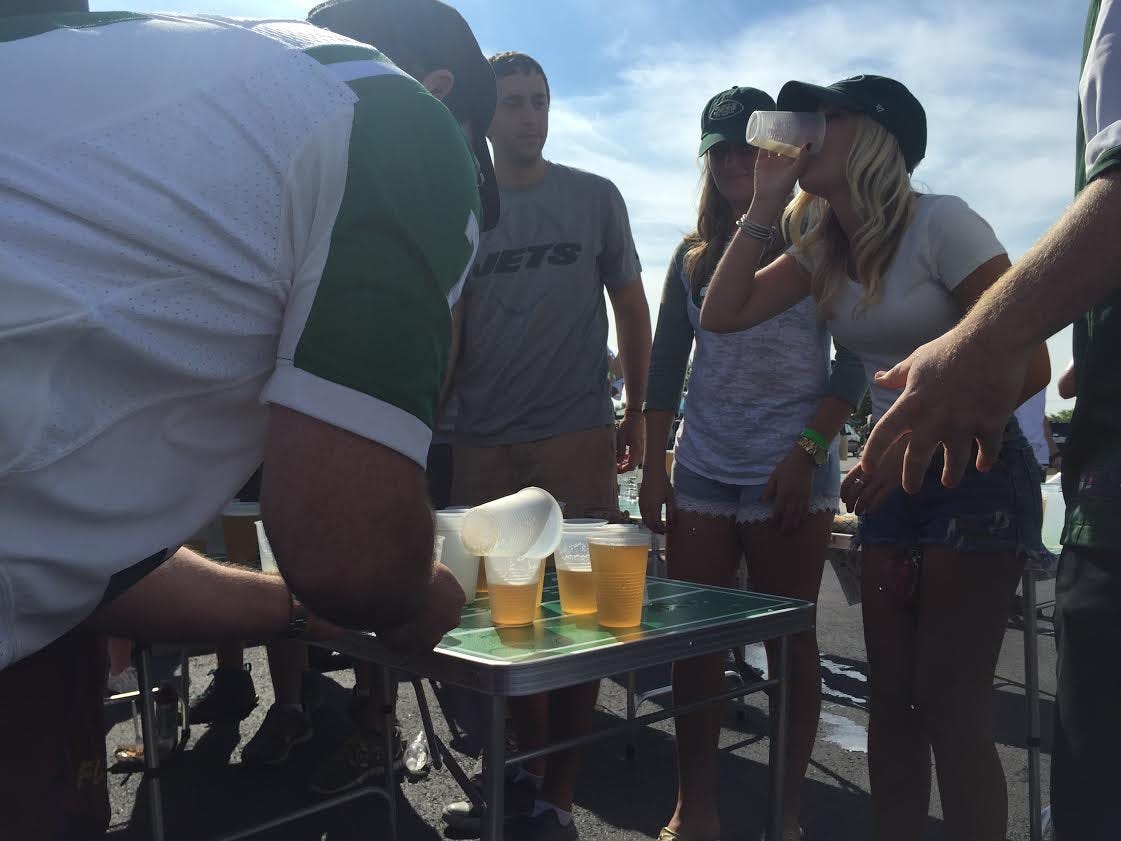 Yesterday was the first ever Barstool Tailgate and it was magnificent. It was glorious. A perfect football day. Beer was flowing, food was cookin, and it was the perfect pre game en route to winning our Week 1 Super Bowl. My only complaint was not enough clouds because I got sunburned as FUCK. There was 185 of us sluggin beers, playing flip cup and beer pong, getting fat off of burgers dogs and pulled pork all set up from my man Sal and the guys with Tailgate Joe. They even served dessert! Dude was standing there actually stuffing cannolis on the spot. A couple highlights and pics from the day: 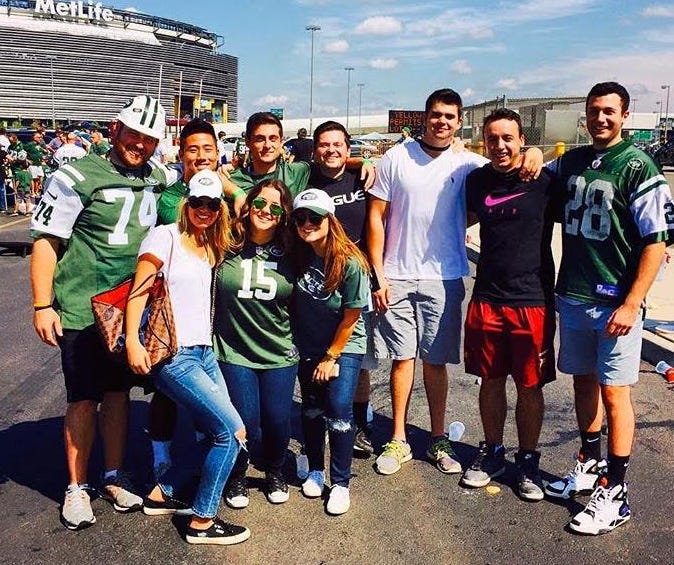 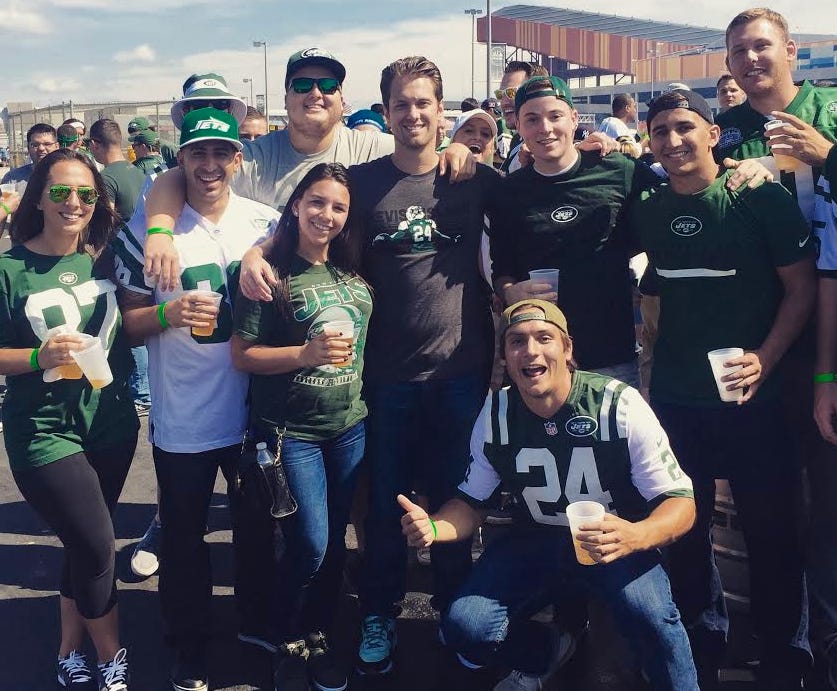 For all you losers wondering, yes there were pretty girls there. Prettiest person at the tailgate was that stud in the middle though. 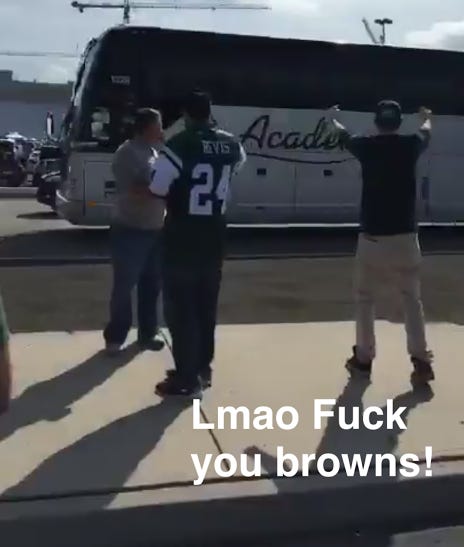 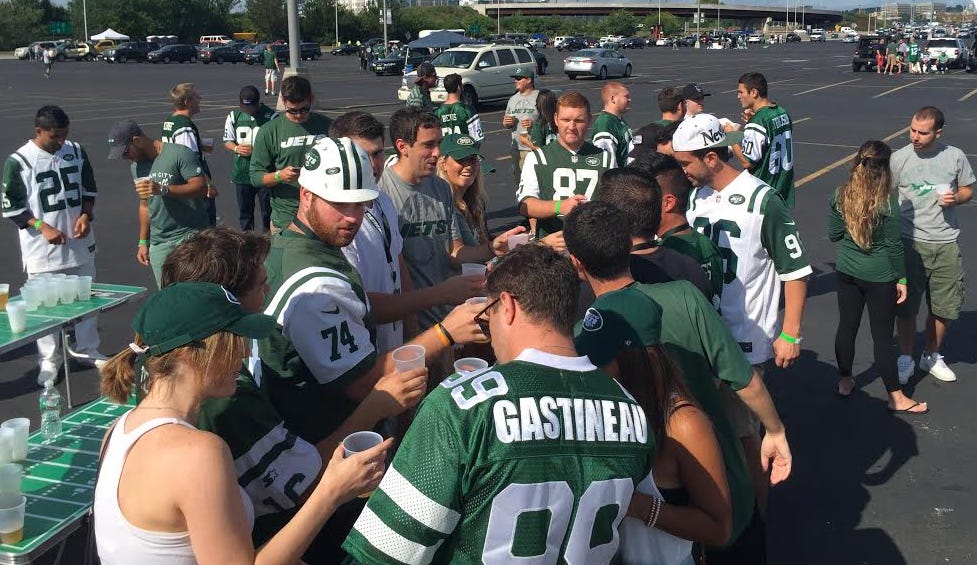 Flip cup was getting physical. Hopefully it led to some sex. I love that move. Boxing her out and shes gotta push you back and shit. Like playground flirting. Hopefully they made babies. 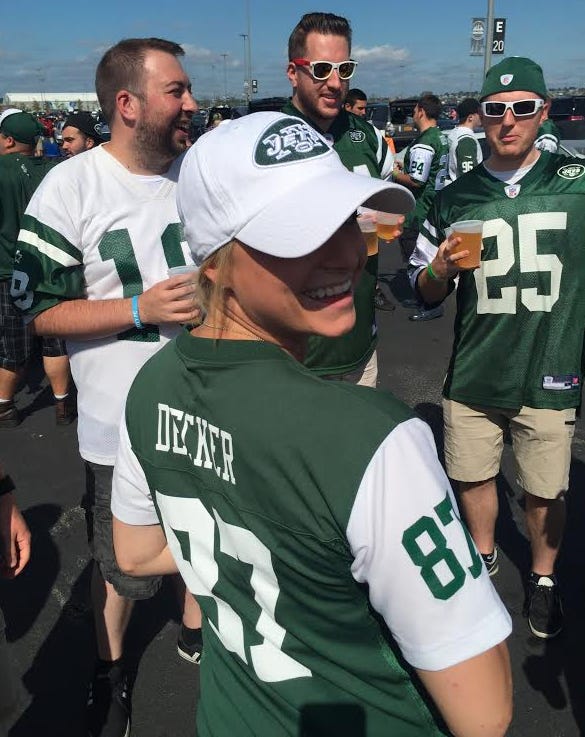 Of course shes a Decker fan. Wish I got a better shot of her eyes. I got lost in those baby blues talking to her about who I’d rather have sex with – Eric or Jessie Decker. 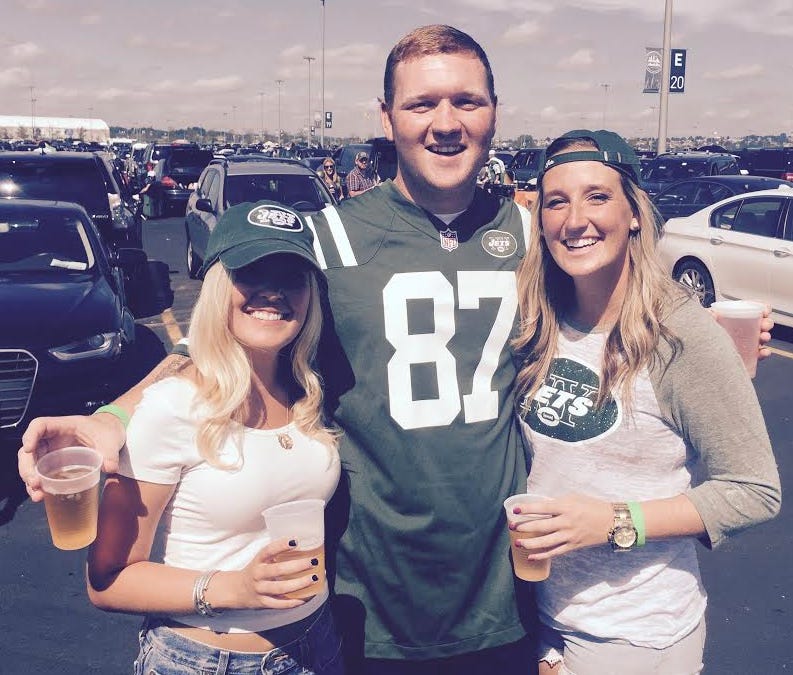 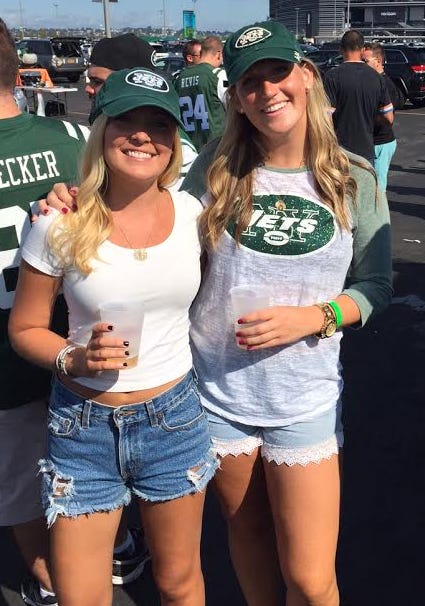 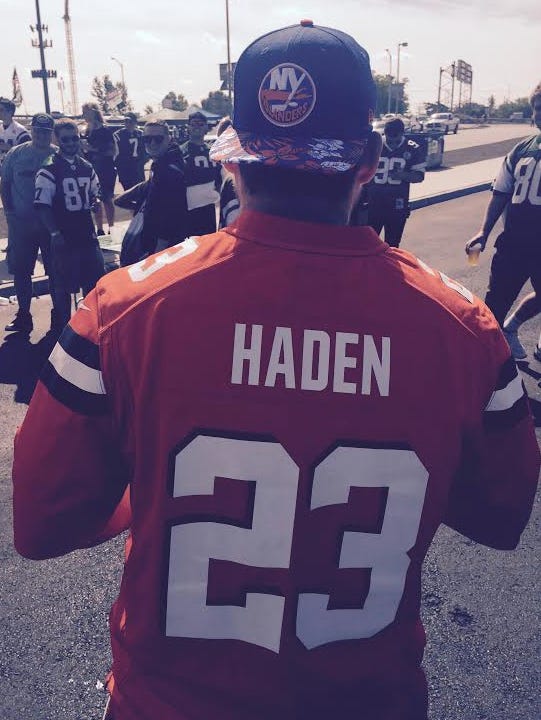 This poor bastard is a goddam Islanders/Browns fan. Never once have I heard of that, and it might genuinely be the saddest combo of all time. At least the future is bright for half of your fucking awful life bro. 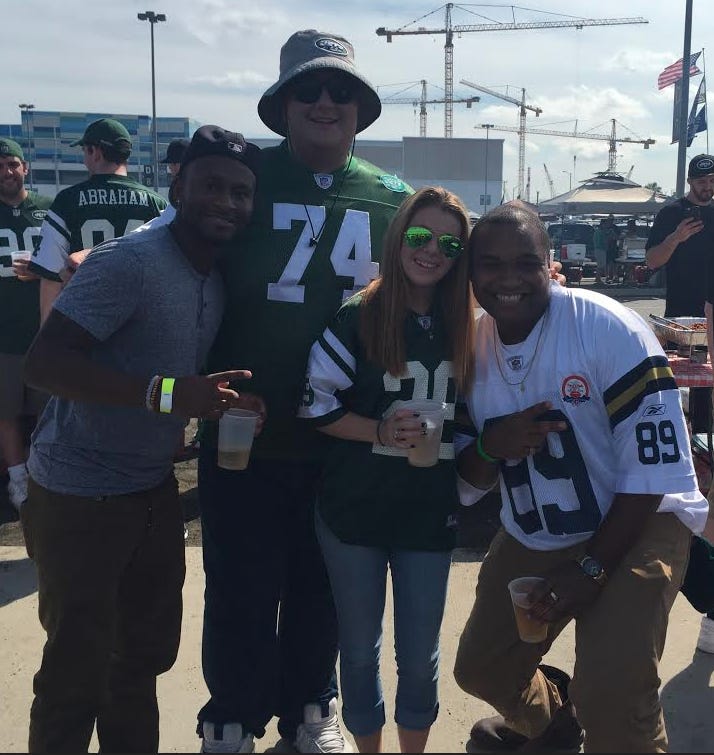 Dude on the right was named STORM. @Stormsabrewin. He was the MVP of the tailgate. Gold watch and gold ring on his middle finger, eating this MONSTER pulled pork cheeseburger combo 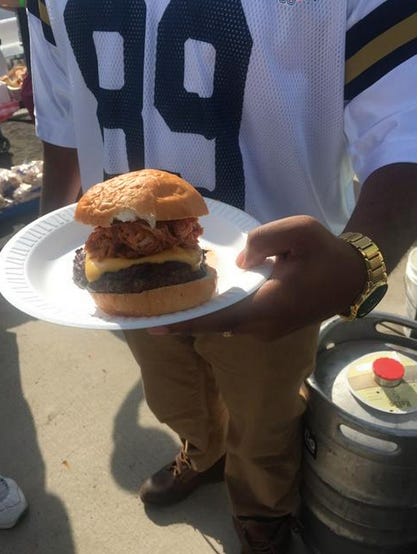 For some ungodly reason, he decided that before we headed into the game, he wanted a bucket of beer dumped on his head. It was a bucket underneath the beer tap collecting any foam run off from everyone’s beer. It had been sitting there ROASTING in the sun all day.

Everyone thought he had a bucket of piss dumped on him 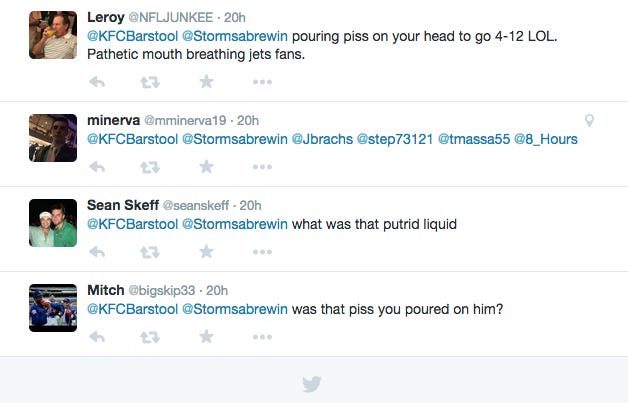 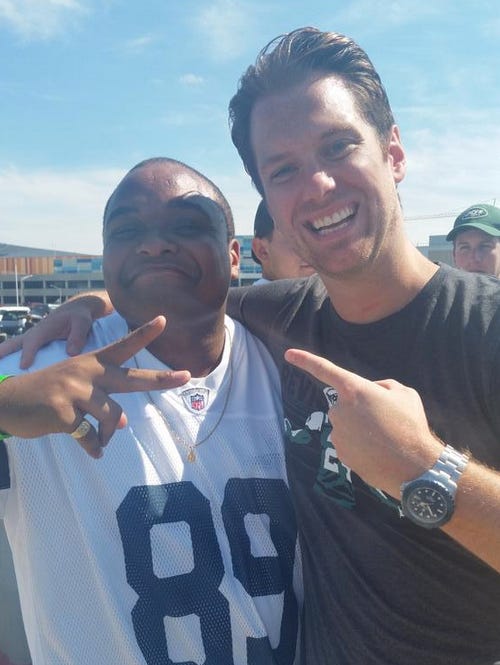 The other 50% of the reason the Jets won was this monster in my section: 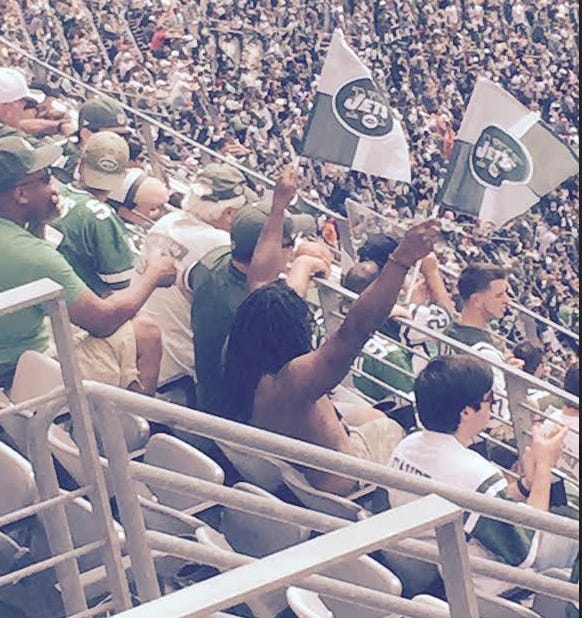 Oh yea and how about these beauties…AMERICA 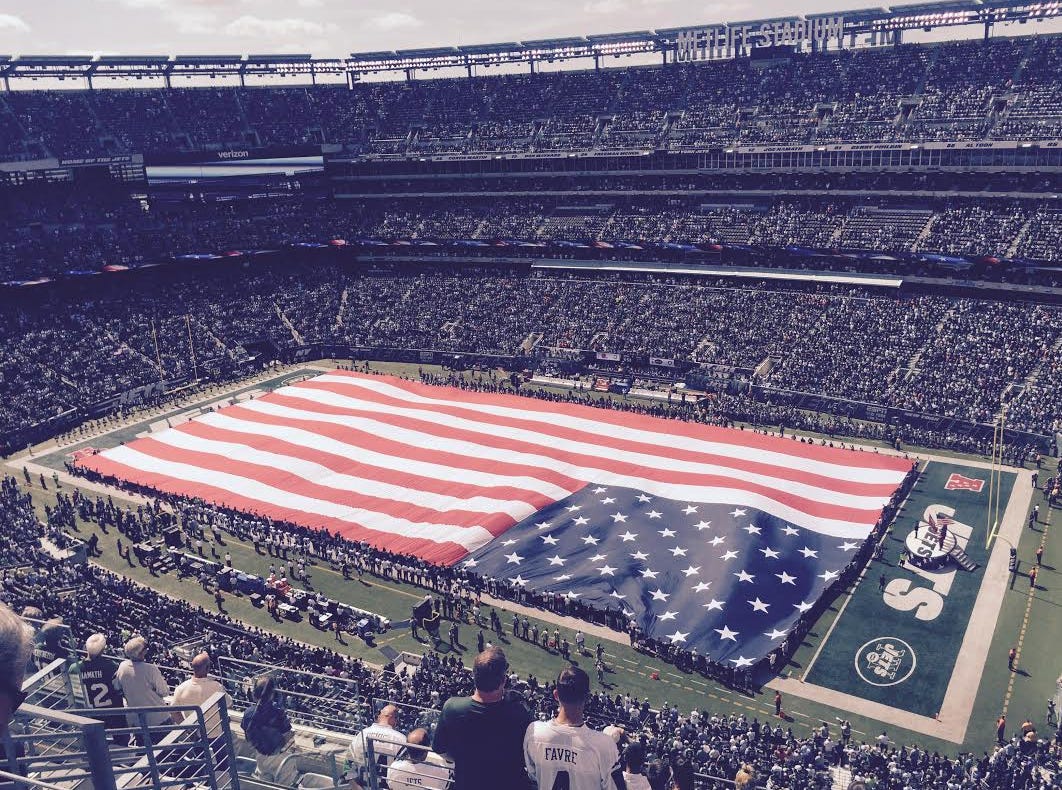 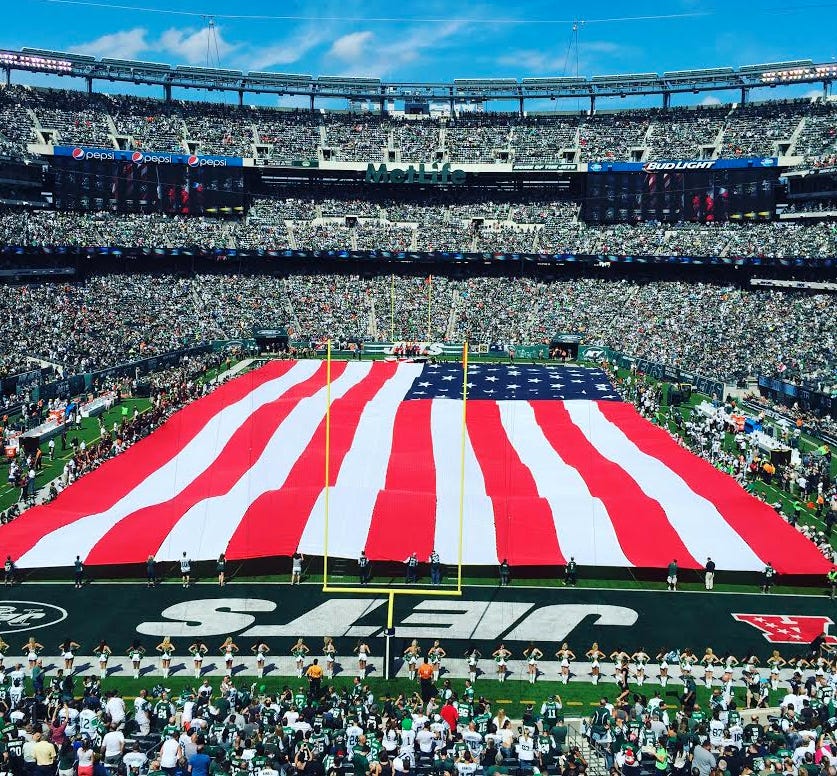 As for the Jets game itself, well what can I say? We are Week 1 Super Bowl Champions again. Straight up DOMINATED the Browns. Football is a simple game when you do 2 things – win the turnover battle and limit penalties. The Jets did exactly that. JFF fumbled every time the wind blew. The O Line protected Fitzpatrick, Fitzpatrick protected the ball. Ivory was an absolute beast. And Decker and B Marsh are real life, big time pro receivers. Everything clicked for the Jets. Thats how you win Super Bowls in week one.

Only negative is obviously the loss of Cro. The Revis signing is evermore important now (All though to be honest he wasnt as lockdown as we would have all liked). You gotta feel for Cro. I think he was excited to be back in action in NY with his boy Darrelle and now hes done for the year with an ACL. It sucks but in an ironic twist from year’s past, this team is looking deeper than ever in the secondary so hopefully his loss isnt too detrimental. It was really the only major black mark on an otherwise perfect day.

That, and my 4th degree sunburn. I might be out for the year too.