Fox 2 - A Virginia couple has admitted to getting drunk and having sex in the middle of a shopping center parking lot. “[I] was in the mood, and that’s basically what happened,” 36-year-old Kimberly M. Jackson told WTKR. Authorities received calls about an exposure in progress at 6025 E. Virginia Beach Blvd. on Tuesday. The caller told dispatchers that a couple was involved in a sexual act in the parking lot. Once police arrived, they found Jackson and her boyfriend, Earl Palmer, in the parking lot. At the time, the man was unconscious and unresponsive. He was taken to Sentara Leigh Hospital for treatment. “The alcohol made me think I wouldn’t. I’m not into erotic public sex or anything like that,” says Jackson. Police told WTKR the woman’s boyfriend was unconscious, but he says he was just passed out from drinking. “I’m here trying to clear her name and let them know I consented to that, I just didn’t finish the job as you could say,” says Palmer.

This is the greatest story ever. Just two wild and crazy (and drunk in the middle of the afternoon on a Tuesday) kids going at it in the parking lot. Dude passes out mid-parking lot sex, and his chick just keeps on going. And then they give the interview of a lifetime, basically giving the same answers I’d give.

Did you think you were gonna be caught? Nope, the alcohol made me think that I wouldn’t. Amen sister. You can do ANYTHING while drunk if you tell yourself you can do it, as long as it doesn’t involve talking to girls. I mean shit, that dude designed a next-level plane while blacked out. As long as there is alcohol flowing through your veins, anything is possible and you won’t get caught doing anything.

And then boyfriend puts reporter chick on the spot: 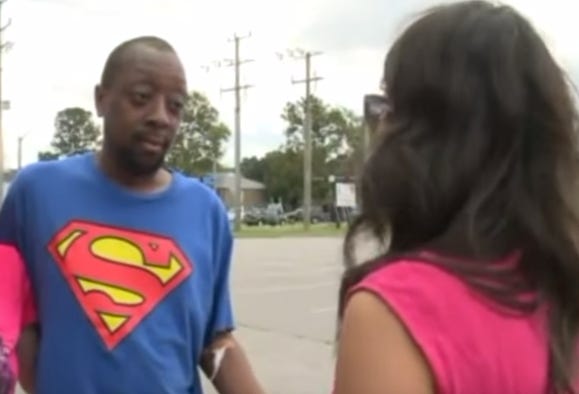 And then finally the boyfriend mic-drop: “Is something like this going to happen again?” Deep thoughts….”I don’t know.” Love the honesty. When you’ve had sex in the middle afternoon in a parking lot once, you can’t go back to missionary on the pay-by-the-minute motel. You’ve gone too far. You’ve seen the other side and it’s glorious. Maybe it won’t be in a parking lot, but I’d bet my bottom dollar we’ll be seeing them again soon. Maybe it’ll be on public bus, maybe a McDonald’s bathroom. But this isn’t a rodeo they are going to quit after one time.