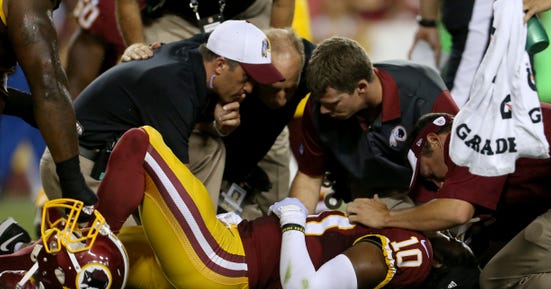 Richmond - Washington Redskins quarterback Robert Griffin III still hasn’t been cleared to play, three weeks after sustaining a concussion against the Detroit Lions. Asked what the hold up was on Thursday, coach Jay Gruden said, “I wish I knew.” Griffin took snaps as the scout team quarterback at practice – given that he hasn’t received clearance, and Thursday is the final full-speed practice of the week, it seems unlikely Griffin will be active for Sunday’s game against Miami.

But wait, remember when this happened?

What a weird saga this has been. Is RG3’s brain mush? 3 weeks to get cleared for a concussion? After he was originally cleared and then not cleared? Have they figured out if he actually had one or not? It’s so strange. This is a tweet from 4 days ago:

Anyone who has had a concussion had been diagnosed either that day, or the next when they are all dizzy. They can’t run tests and find out in 3 weeks if he can play? What sort of shit is going on? There has to be more to this story than they are letting us know. The biggest nightmare ever is his brains are leaking out of his head so they have to pay him that 16 million dollars.

The team is being eerily quiet about this, I’m sure they’ll lie about something at some point because they don’t handle themselves professionally, and then we’ll have more fun Redskins blogs to write.