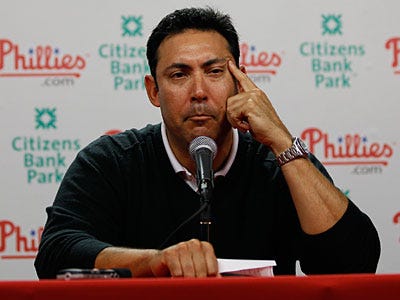 #Phillies announce that Ruben Amaro will not be back. Scott Proefrock is the acting GM as of today.

Might have been a day late and a dollar short, but the bell has finally tolled for thee. I was honestly scared that the trade deadline push that started to re-stock the farm system would save Ruben’s job, but a few weeks of mediocrity couldn’t save years of disaster. This man took a Rolls Royce of an ballclub and not only didn’t get new/better parts when some of the vehicle broke down, but drove it into a ditch and lit it on fire. There have been way to many inexcusable moves made by this man dating back to his beginning. Why did we trade away Cliff Lee again in 2010 when we could have had him AND Doc (with Cole)? Trading the farm for Pence then essentially giving him away for no reason a year later. Dumping Victorino for nothing. Marlon motherfucking Byrd. Not getting something, ANYTHING, for Cliff Lee when his wing was about to fall off and eating his $25 million contract. LOOK IN AWE AT THE STARTING ROTATION, NAY, THE ENTIRE LINEUP AT THE BEGINNING OF THIS SEASON. Even hiring Sandberg, after unceremoniously letting Cholly go, proved to be a disaster. And we could go on, but there’s no reason to twist the knife.

Goodbye, Ruben. We knew too much of thee. #IStillHateThisTeamButWeAreMovingInTheRightDirection