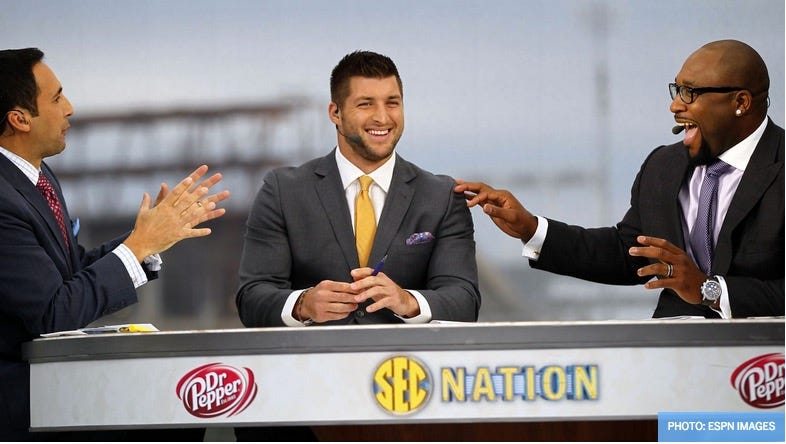 SEC – Tim Tebow returns to ESPN this Saturday, Sept. 12, as an SEC Network college football analyst. Tebow resumes his role on the network’s two-hour traveling pregame show, SEC Nation. The show is live from Nashville, on the Vanderbilt campus, beginning at 10 a.m. ET (9 a.m. CT) prior to the Georgia at Vanderbilt football game.

“Tim quickly developed into an excellent analyst last year, and we were not shy about acknowledging his home at ESPN should he be available to return,” said John Wildhack, ESPN Executive Vice President.

Poor Timmy. All the guy wants to do in the whole god damn universe is play some NFL football, doesn’t care for who, doesn’t care what string, just wants to be on somebody’s roster. And no matter how many games he wins they just won’t let him. Just picture an empty chair on a dimly lit SEC Nation stage with a “TIM” sign on that he comes back to after every off season, lets out a deep sigh, and slouches into it as makeup comes over to apply the powder. Brings a tear to my eye.

Say what you want about Tebow but he’s been great on SEC Nation. He’s a natural in front of the camera and has great insight – it’s easy to forget after his NFL circus ride he’s one of the best college football players of all time. I mean it’s not like he’s in the pulpit giving a sermon on the glory of God – just talking about some SEC football, his specialty and something we can all get on board with.

Plus you need somebody level-headed to talk some sense on a show with Finebaum on it and now McElroy’s clown ass. 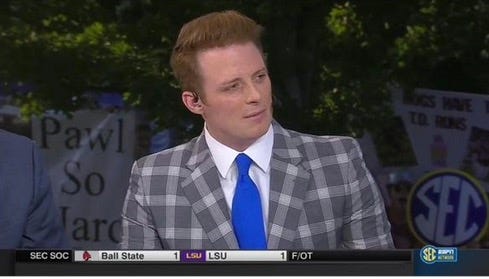 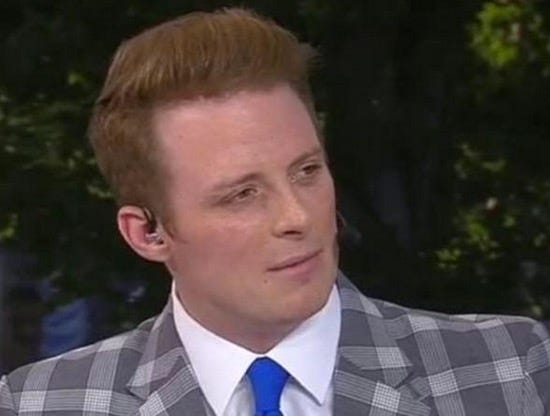