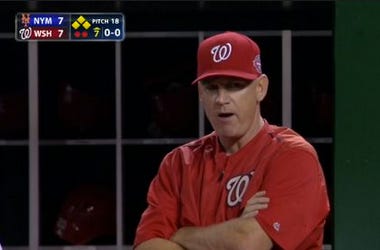 SI - Every great horror flick has one more turn of the stomach before everything fades to black. Williams provided it.

A Jayson Werth single put the tying run on base to begin the bottom of the ninth. Williams had his 2-3-4 hitters due, beginning with Anthony Rendon, one of his best and hottest hitters (two hits in the game, .324 over his past 17 games). There’s no way the Nats bunt Rendon, right? Including his last year at Rice, the six minor-league teams he played on and his entire major league career—that’s 2,007 plate appearances over five years—Rendon has a total of four sacrifice bunts, all with the Nationals in 2013–14, including only one with a runner on first base—and that was when he was a rookie batting eighth.

So Rendon has bunted exactly one runner over to second base in the past five years, and yet Williams asks him to do so to give up one of only three outs he has left in the biggest game of the season. Why? Williams was worried about a double play. Seriously. He even asked Rendon to bunt when the count went to 3-and-1, after which Rendon has a whopping .478 OBP this year.

An ashen Williams, snapping gum into the postgame microphone but explaining himself in a dull, flat monotone, said he was worried that the sinker/splitter combo of Mets closer Jeurys Familia might produce a ground-ball double play off the bat of Rendon.

In other words, Williams gave up an out from one of his best hitters who never bunts because he was worried about something that happens 12% of the time—that’s how often Familia actually gets a double play when one is in order (about the same as the MLB average of 11%). The odds were overwhelming against a double play happening, but Williams was petrified enough of that longshot to give up Rendon’s bat, even with the count overwhelmingly in his favor.

“He bunted it too hard,” Williams said of the—surprise!—failed bunt by the non-bunter.

“We wound up with the same situation anyway,” Williams said, referring to howBryce Harper followed with a walk.

Well, no, actually. If you let Rendon hit, and he gets on base, that’s very different from bunting into a force out.

This season, Williams has successfully sacrificed in the ninth inning only three times, and those players asked to give themselves up—Danny Espinosa, Ian Desmond and Matt den Dekker—batted sixth, seventh and ninth in the lineup, nowhere close to second.

Fittingly for you fans of all things karmic, the next batter, Yunel Escobar, did ground into a double play. Game over.

So much sadness. So much sadness. Rendon has bunted a runner over once in his career. Once. And that’s what Matty Williams went with in the 9th inning with Jayson Werth on first. And he’s not exactly the fastest amigo in the old west. And then when Rendon pulled back enough bunts to run the count to 3-1, with Bryce Harper on deck, Williams still kept the bunt sign on. I’m not even mad, I’m amazed. Everyone watching last night was kind of just scratching their heads, like “what am I seeing right now?” Mets fans who otherwise would have chirped me on Twitter were genuinely asking “what is happening right now? Why is your manager giving away an out in the 9th inning with Anthony Rendon at the plate and Bryce Harper on deck?” And there’s no answers. Oh but wait, now we have one. “We wound up with the same situation anyway,” Williams said, referring to how Bryce Harper followed with a walk. WHAT IN THE FUCK IS HE TALKING ABOUT???? That’s an actual quote from last year’s manager of the year!

I’ve blogged about it a few times, but probably not enough, about how Matt Williams doesn’t use numbers or statistics or any of that- he just goes with his gut, baby! Nevermind he took the bat out of Rendon’s hands because of a 12% chance of a double play after Werth just sliced a ball into right field. Nevermind if Rendon gets on Harper, albeit his struggles vs the Mets, is still at the plate with 2 on and none out. If you want to talk about fundamentals of managing a ball team, Matt Williams has zero. No correct instincts, no way to bring out any sort of passion from his players, no nothing. He had the heart of the lineup up in a must-win spot and made a guy who has bunted the same number of shits I’ve taken today. That’s when you know it’s bad. And you know it’s really bad when fans find a way to boo Matt Williams after his presser. This guy has got to go.