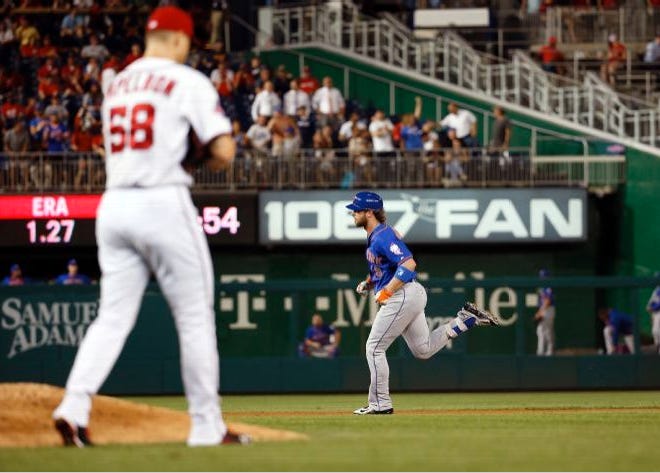 Look I dont want to do this. Of all people on this planet earth, I am the most cautious, pessimistic, bleak, doom and gloom Mets fan alive. Theres a lot of us, and I’m at the front of the line. Heading into this series, I expected to lose some ground on the Nationals and the looming Yankees series and final 3 at Citi vs. the Nats had me thinking of 2007 all over again. Truth be told I never really thought they’d blow their entire lead and miss the playoffs, but I think it was gonna come down to the wire.

So I dont want to do this. Its the last thing I want to do. I dont want to jinx. I dont want to mush. But goddamit I’m a Newsman! I have integrity. And more importantly I’ve seen enough losing baseball to know a team thats dead on their feet. The Nationals are dead on their feet. The last 2 losses were absolute backbreakers. I mean never had a first place team been more ripe for the picking than the Mets coming into this series. Losers of 2 of 3 against the last-place-in-any-other-division-Marlins, major controversy swirling around their biggest and loudest star, media frenzy, enormous distractions, and Ghosts of Collapses Past beginning to creep into the picture. The Mets trot their worst starter out there for game 1 against the Nats 200 million dollar man. Niese completely implodes and gives up 5 runs in the 4th, including an oh-so-dramatic grand slam. Dario Alvarez K’s Bryce Harper, the Mets come back and win. Harvey on the mound in the biggest start of his life game 2, all the pressure in the world on is shoulders, and the Nats jump all over him. Thanks to shitty spots and an error by Cespedes, he basically has the worst big start ever and gives up 7 runs. Kirk “shouldnt-even-still-be-in-baseball” Neiwenenheius blasts the game winning home run as the Mets overcome a Little League Grand Slam and a 6 run deficit.

Those, my friends, are back to back backbreakers. The Mets took the Nats best punch twice in a row and just ate em. Grabbed the W utilizing absolute nobodies in big spots. The Nats had every opportunity to pick off a very vulnerable team (as a matter of fact, these wins have been so shaky its not very inspiring for any potential postseason play, but whatever. Just get in baby) and they squandered every chance. An ace vs a bum, L. 6 run lead, L. NL MVP in a huge spot against a kid making his debut, K, L. Met killer Wilson Ramos does his thing and hits a grand slam, L. Chase the “Dark Knight” early, L. I’ve seen soul crushing, demoralizing September defeats and the Nats just took 2 of them consecutively.

This isnt a huge ringing endorsement of the Mets. You can always spin these wins as perseverance. “There’s no lead this team cant overcome!” “The comeback kids!” And some of that is true to some extent. This team is playing with a confidence that screams “No lead is safe,” albeit against bad teams. But if you pitch like that in postseason play against real clubs, its sheets. So I’m not here to pound my chest about the Mets. This is just a eulogy for the Nationals. They might not know it yet (or maybe they do. Maybe thats why the fans leave) but they’re dead men walking. The lights are on but nobody’s home. Next punch that lands puts them to sleep.

PS – In retrospect now that this season has been an abomination that period of time where they were all smearing chocolate sauce on each other was bizarre.

PPS – Last night was the highest rated baseball game of the season. Take Back New York seems to be going alright.