He soon gets up and starts arguing with himself and acts like he wants to fight with someone who was in front of him and goes up against a wall and starts shouting. He takes off his shirt and starts walking around which endangers the public a lot more because we don’t know if he’s going to hurt someone because this man already seemed agitated. At this point he starts throwing chairs to the ground and slammed a wet floor sign to the ground and pushing chairs.

During the moment i had forgotten to turn my phone sideways which is why its at that angle so i do apologize for that. After he was detained, his legs were soon in cuffs and had a human muzzle it seemed like because he was still shouting and screaming. The ambulance arrived probably about 2 or 3 mins later after he was detained. He was then transported to a DC hospital. After all, he was tased 3 times, maced about 4 times, hit with the baton twice, tackled to the wall, and almost had his arm broken when being detained. Throughout the whole incident, this man showed NO sign of giving up and was resisting arrest. It seemed clear after being tased for the first time that this man WAS ON DRUGS.

I have no doubt this guy seemed like a danger to himself and others if you were stuck at that McDonald’s with him. And I also think cops weren’t out of line throwing everything at him like they did when he wouldn’t go down. But I have to say I felt bad for this dude all yakked up on something when he made this face after the cop whacked him on the thigh with his club: 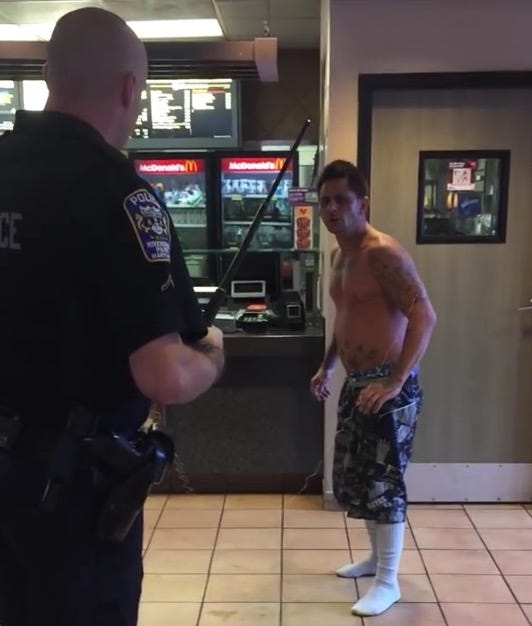 You know what that face is? That’s the face when your dog pisses or shits on the floor and you catch him a second or two too late and he’s already forgotten what happened and looks both a combination of confused and betrayed. I just feel bad for the guy. It’s not his fault he’s superhuman strong because he gave into the guilty pleasure of PCP. Seeing this dude get everything thrown at him as his high as balls self-preservation kick in and makes him unstoppable isn’t totally his fault. I want to put him somewhere he can use these powers for good like the military or a mosh pit or teaming up with Iron Man on The Avengers. That face means he’s got a good heart somewhere.

Also this would have been easily prevented if McDonald’s hadn’t ditched this old marketing campaign. Drugged out dude needed his break today and had no clue if he was in the right place to get it: