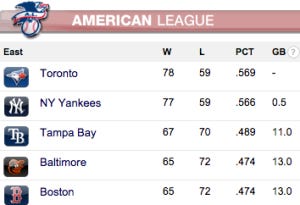 Absolutely huge weekend that saw the Yankees take 2-3 (should have been a sweep) from the Rays and then come from behind the Orioles like a married couple trying to spice things up in the bedroom. In the last 10 games, the Yankees have gone 8-2 while only gaining 1 game on the Blue Jays but like I said last week, all we have to do is keep it close enough to handle our own business head to head with Toronto.

The rest of this series against Baltimore are easily winnable games started by Tanaka and CC who both have something to prove in order to get ready for the playoffs. Tanaka hasn’t been great this year at all times, but has seemed to step up when we needed him the most and when the bullpen needs a rest. Tonight is another one of those games because even though we have the extra arms in the pen, seeing most of them (Capuano) in a game is a bad sign. CC on the other hand has let us down most of the time we needed him to step up, but recently has found glimmers of his old self. The hope is that in the last 2 weeks he has had off, CC has gotten healthy both physically and mentally because if he can’t deliver, he will find himself in the bullpen in October.

While the wins have been great and keeping pace has been important, we do have to be concerned about the health of the team moving forward. Tex has been a blow to us even with Bird coming up clutch, but losing Eovaldi may be a bigger blow than anyone realizes. His overall stats aren’t that impressive but he leads the team in victories, innings pitched and starts. Most people don’t like that wins are a stat but at the end of the day, he gives the team chances to win by keeping the ball on the ground and in the playoffs, with our lineup, we just need chances to win in the playoffs.

So KFC covered this earlier today and guess what? In a shocking turn of events, king hater sided with the guy accusing the Yankees of trying to rape him. These accusations could make all Yankee fans furious, but they are just so ridiculous, we just have to laugh at them. Let look at them all and laugh together.

Overall, this is a pathetic attempt by a guy who has nothing to lose because when he gets sued, there is probably nothing to take from him to try and get some hush money or sell some books at the team’s expense. A lot of people hate the Yankees so they will jump on board this guys bandwagon, but if you believe a guy who has such great proof, he had to go on Craislist to find a co-author 8 YEARS AGO, I don’t know what else you should do besides end it all because you’re a danger to society.