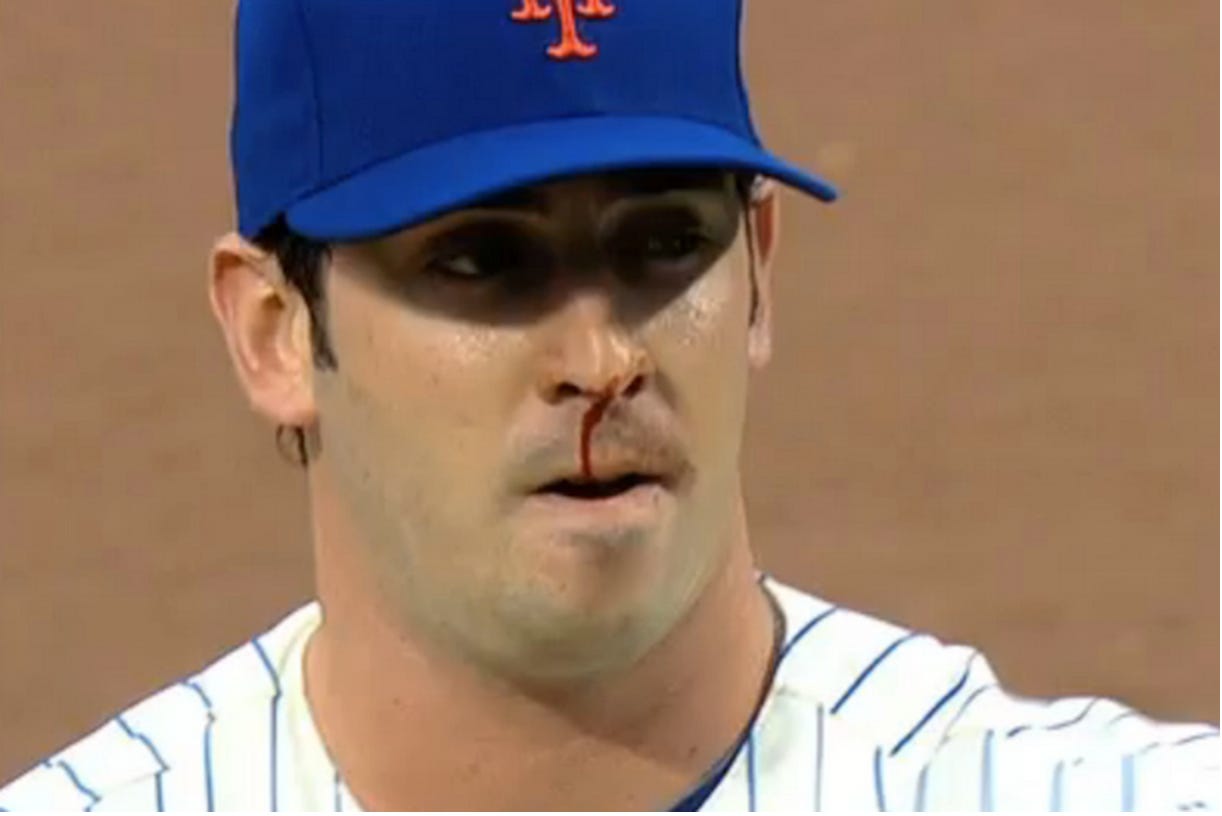 Well the last thing this team needed as the calendar flipped to September is a controversy with their beloved pride and joy Matt Harvey. But this is what happens to the Mets during the 9th month of the year. The wheels fall off.

So here we are. Matt Harvey at 166 innings. Scott Boras claiming that doctors have stated he should have a 180 inning cap and that Harvey should be shut down regardless of the Mets being in contention. Which I immediately chalked up to Boras doing what Boras does – posturing at all times to make sure he and his client get the most money possible. By painting this picture that doctors have explicitly stated it would be dangerous to go 180+ innings, he sets up his client to look good no matter what happens. If, God forbid, Matt gets hurt, Boras has set up the Mets to be the fall guy. Its their fault. If he succeeds and pitches well in the post season, when its time to negotiate for that mega contract, he can paint Harvey as the hero who sacrificed his health against doctor’s orders in order for his team to win. I thought this was as transparent as can be. Yet there was still a contingent of people out there saying Boras works for Harvey and that all this talk must be coming from the player. I thought that idea was ridiculous. We’re talking about Scott Boras here, who only cares about one thing. Money. In my mind there was probably a conversation between Matt Harvey and Boras where Scott said “Do you want me to make you the most money I possibly can?” and Harvey said yes. Meaning, let me do my thing. Let me posture and negotiate and say what I gotta say. And you keep performing and in the end we’ll be in the best position possible to make 200 million.

But then today Harvey sits down in front of a podium and says this:

And now I dont know what the fuck to think. Yesterday I was guaranteeing that Matt Harvey would never sit on the sidelines as his team makes a push for the postseason and a World Series. Nothing he has ever said or done has ever portrayed him as the type to do that. And now, I just dont know.

Who is the real Matt Harvey? He walks around like he’s some big swinging dick John Wayne type of guy. He’s the guy who threatened to beat up 6 foot 10 inch Jon Rauch in the clubhouse. He’s the competitor. He’s “The Dark Knight.” The guy who throws a pound of tobacco in his mouth and throws 98 mph with blood pouring out of his nose. He fucks super models and does whatever he wants. Defies the Mets and their wishes. Says he wants to be the next Derek Jeter. Says fuck the idea of a 6 man rotation.

And then 3 weeks later he’s saying he’s “always” considered his cap to be 180 innings? Now all the sudden all he cares about is future earnings? Now its just whatever the doctors and Scott Boras says is what he’ll do?

Fuck that, man. Its either one or the other. I can’t begrudge a guy for saying he has an innings limit and he’s not willing to go beyond it because his ultimate goal is a $200 million contract. But either be a normal, cautious, tentative pitcher and be up front about your innings cap, or be the superhero you always pretended to be and don’t. But you cant be both. That doesnt jive.

My major problem with all of this is the miscommunication from all parties involved. How could all parties – Mets, doctors, pitchers, and agents – not be on the same page as to whether this was a hard cap or an ideal limit? Something like that needs to be EXPLICITLY understood and agreed upon in April. To me this whole conflict reads as the Mets never expecting to be in contention for the 2015 season. Winding Harvey down in a season where the team was .500 wouldnt be an issue. But here we are on September 5th with a 5 game lead and a pitching rotation that is capable of doing some damage in the playoffs, and so now its an issue. But I cant really fault the Mets for saying “Ideally 1 year after TJ surgery, we’d shoot for 180 innings. But we’re in contention and 1 of just a handful of teams to maybe get the chance to play for a World Series, so obviously thats now out the window.” That seems to be a very fair mentality. And I cant fault the Mets for thinking their hard headed, cocky, arrogant, ultra competitive ace would be on board with that. This new Matt Harvey standing at the podium saying “Doctor’s orders!” does not jive AT ALL with the personality he’s exhibited from day 1. While the Mets ultimately bear the responsibility of making sure they are on the same page with their players, I can’t help but feel that they’re getting the rug pulled out from underneath them on this one. Again, there HAS to be a conversation where this is completely laid out and agreed upon. But blaming the Mets for thinking their pitcher would want to pitch during a pennant race is kind of bullshit. In the era of coddling pitchers, this might be the worst moment yet. Right up there with shutting Strasburg down. This one almost bothers me more though because it seems like Harvey duping the team. I dont think its that far fetched to think Matt Harvey would be man enough to want to play ball.

I also hate this idea that Matt Harvey’s career is absolutely over if he pitches in October. Like pitching 5 or 6 more starts means his career is a wrap. I think if anything we’ve learned that limits and rules and coddling pitchers doesnt work. From Strasburg to Joba it just doesnt seem to help. If injuries are going to happen, they’re going to happen. Harvey had a longer recovery and rehab than most. He’s seemed completely fine this year. I dont think that he’s facing certain doom if he exceeds 180 innings. Unless he’s actually hurting right now and hasnt said anything, it just DOESNT MAKE SENSE that he’s all the sudden this ultra cautious timid guy who doesnt care about winning.

So will the real Matt Harvey please stand up. I thought Matt Harvey would strive to be that Madison Bumgarner type. Not the Stephen Strasburg type. I thought Matt Harvey’s mindset would be “The best way to up your “future earnings” is to go be a World Series MVP, not sit in the dugout while your team busts its ass in October.” But I guess I dont really know anymore. I dont think anybody knows anymore, except for Matt Harvey. So show your true colors, Matt. Be up front and stop with the cryptic quotes and just state whether you’re gonna pitch or not. Either be the superhero you’ve always pretended to be or say you’re all about the money but this half and half bullshit isnt gonna fly.