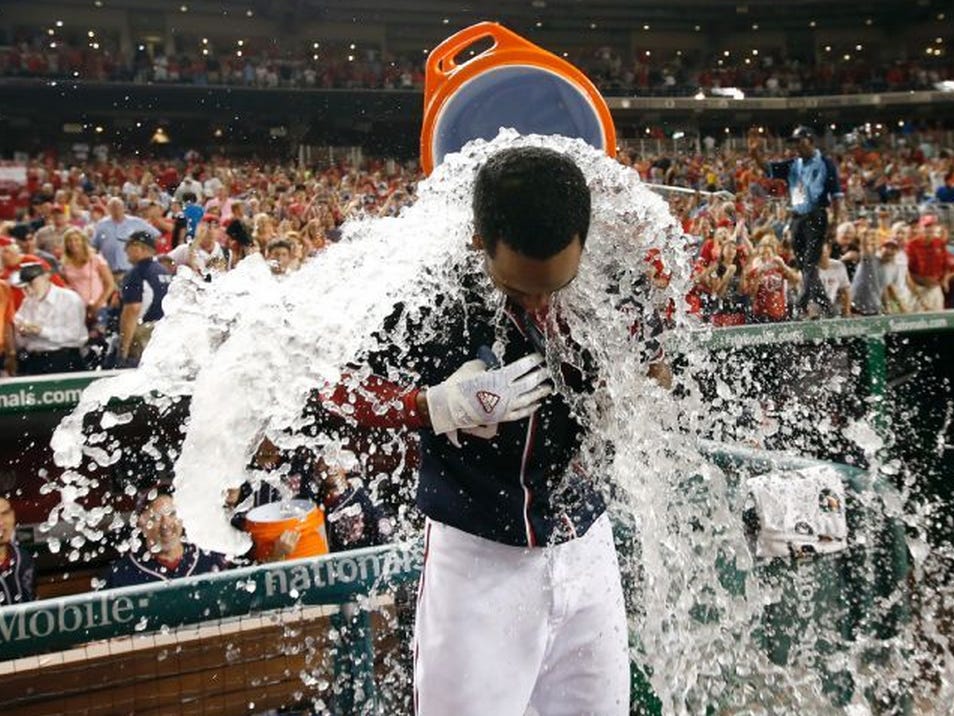 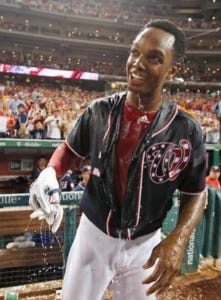 The Nationals won their 3rd straight game last night 5-2 in extra innings, thanks to a pinch-hit homer from the injured Michael A Taylor. The kid is the most clutch rookie I’ve ever seen. This is a bold proclamation but fuck it, I’m going for it: Michael A Taylor is the greatest .240/.288 hitter of all time.  He has his 12 hits in 35 (.343) high leverage at bats this season (He has 3 HRs in those 35 ABs too). Plus he has an outside but still legit shot at 20/20 (14 homers, 15 steals right now) as a defense-first rookie. Now, Taylor is far from a complete and finished product at this point but it’s easy to dream on this guy and to even compare him to another defense-first outfielder that is finding his way in the majors now: Jackie Bradley Jr. of the Red Sox. Both players have excellent defensive skills, both have speed, and Taylor has more power (though he also strikes out more and walks much less). If Taylor can harness his offensive skills that he used so well in the minors then he has perennial All-Star upside.
Bryce Harper hit his 32nd homer of the year to the second deck in center. Thing was blasted.

But the biggest positive from the game was Matt Williams did not manage like a total buffoon. It was like I was watching 24 but instead of trying to stop a rogue Jack Bauer, the chief of the CIA just decided ‘hey, he’s saved the 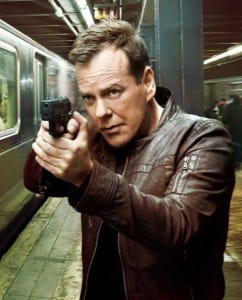 country 9 fucking times already, might as well just sit back and assume he knows what the fuck he’s doing.’ Williams threw Pap into the game in the top of the 9th when the team was down 2-1 and actually used him for 2 innings (thanks to orchestrating an effective double-shift). I nearly shed a tear. I’m hopeful (but maybe delirious) that this example of success in using a closer in a non-save situation might influence his future decisions.

All in all, just an all around great day for the Nats – The Mets tied the Marlins up in the 9th but managed to lose their game 6-5. Terry Collins apparently didn’t have the same revelation that Matt Williams did because he chose not to go to his best relief pitcher when the game was on the line in the bottom of the 11th and he paid the price. The battle for worse manager between Williams and Collins is heating up and should go down to the wire. The Mets already have a history of hilarious September collapses but this one has a chance to be special considering they may choose to play some of their final games without pitchers like Matt Harvey or Noah Syndergaard in their rotations due to silly innings limit theories (Innings limits worked out so well with Strasburg, right?)