Terps football is finally here. Last year they made some noise on the road on their way to a modest 7-6 record, albeit short of my 8-5 prediction due to a complete and utter collapse against Rutgers. Either way, 4-4 is and 3rd in the Big Ten East is not too shabby for a team that most predicted to finish in the cellar. Having said all of that, there’s been plenty of turnover in College Park since last December, so here’s what you need to know going into this season.

1. Perry Hills Is Your New Starting QB…… For Now. 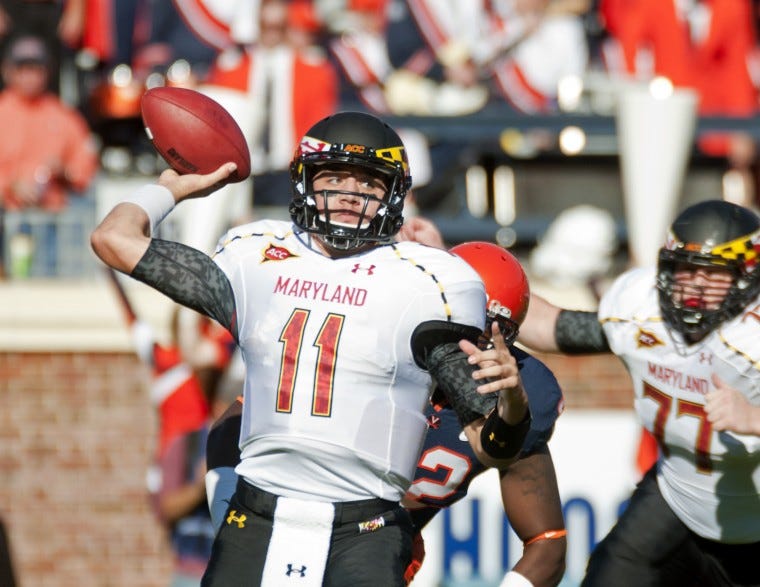 Randy Edsall held a good ol fashioned 3-way QB competition in camp…. and Perry Hills came out the victor after being widely considered the #3 going in. Whether or not that was a fair label, I don’t know. Hills was the first guy off the bench for CJ Brown when Brown went down in 2012 and started 7 games before suffering the same ACL tear CJB did. Hills wasn’t terribly impressive (9 TD’s/7 INT’s), but he was also a true freshman. After his injury, Caleb Rowe took over and was just as mediocre as Rowe had been. For whatever reason, Rowe moved ahead of Hills and served as CJB’s backup after that season, so the assumption was that the job this year was Rowe’s to lose. Which it looks like he did. Oklahoma St. transfer Daxx Gorman had his shot at the gig as well, but Hills came out on top.

So what does Hills bring to the table? His teammates say he brings a sense of calmness. They say he has the intangibles that every coach loves in his QB. He’s not a gunslinger like Rowe is, but can operate an offense and complete the short passes that OC Mike Locksley loves to call. He’s big and can pick up tough yardage with his feet. But don’t expect him to wow anyone. His job will mostly be handing it off to Wes Brown and Brandon Ross. And if he struggles, we could see Gorman or Rowe get their shot. And we all know injuries at the QB position are a near certainty when it comes to Terps Football

2. This Team Is Obviously Going To Miss Stefon Diggs 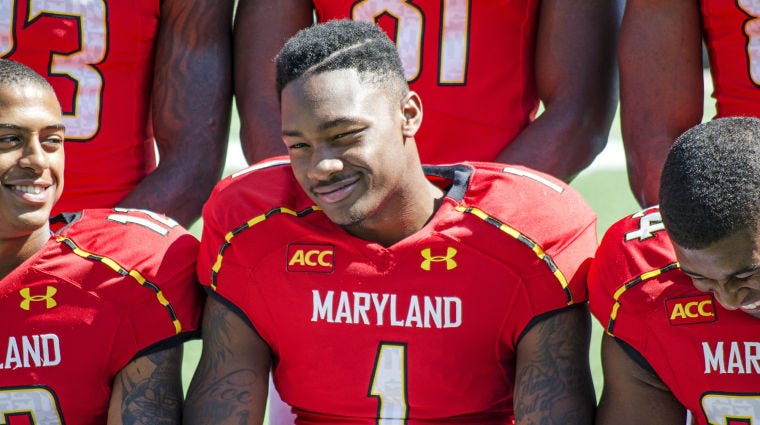 Let’s make this clear. Replacing Stefon Diggs is nearly impossible, especially at a school like Maryland. What doesn’t help is that his departure to the NFL (stardom already in process) coincides with the departure of Deon Long and Marcus Leak. Leak was presumed to be the top WR going into this year and decided to leave the program in May. The good news is there’s actually still some good talent in this WR corp. It’s not as bad as you might think. The top returning guy this year is Amba Etta-Tawo. He’s had his injury concerns over his first two years, but has shown flashes in the 16 games he’s played, including 500 yards his freshman year. The other two guys to keep an eye on are the Jacobs brothers. Both missed all of last year, but were highly regarded recruits who are poised to break out. Here’s some clips of Levern in 2013.

3. Brian Stewart Is Gone And Keith Dudzinski Is Your New Defensive Coordinator 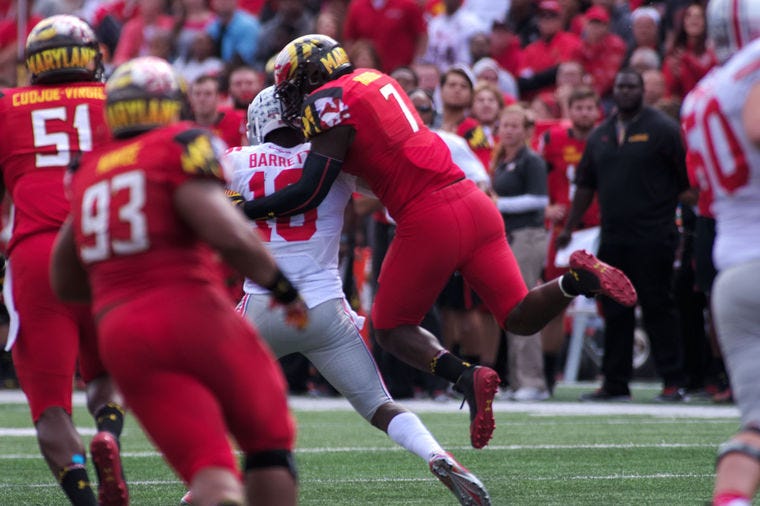 Brian Stewart quietly put together 3 good seasons coordinating a 3-4 defense in College Park. Dudzinski is making the switch to the 4-3, a major transition that I’m honestly not wild about. They have the personnel for the 3-4 and it’s proven to be mildly successful here over the years. But it is what it is. Dudz has said he’s looking to be more aggressive and create more turnovers (what DC isn’t?). Standout OLB Yannick Ngakoue will slide down to DE, veteran Terp Sean Davis will move from FS to CB. The idea is that Yannick will be doing what he does best which is getting to the QB. He’ll have his hands full against those tough OL’s of the Big Ten 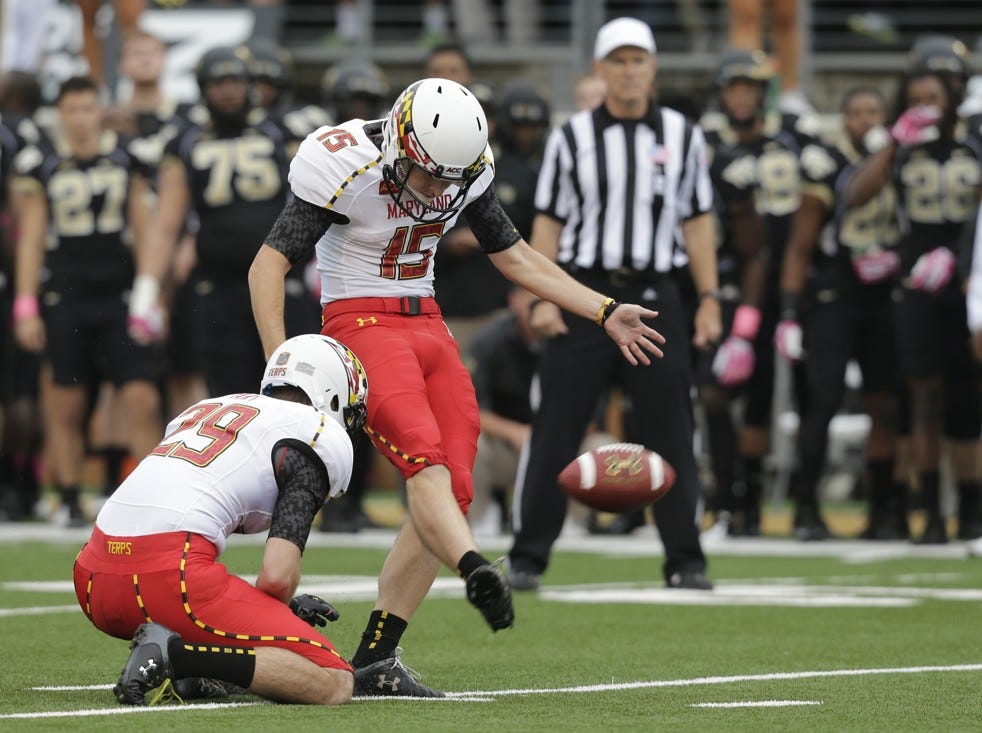 Is it sad to have a kicker as your MVP? Yes. Yes it is. But he is the reigning Lou Groza Award winner after all. He’s come a long way. I remember him doinking a kick against NC State his rookie year to lose a game and thinking he’d never make it. But the Aussie really refined his game in 2013 by working with maybe the greatest kicker to ever boot em through, Matt Stover, and it’s all been gravy since. I’m not sure how often the offense will get the ball in FG range, but it’s nice to know FG range means the 40 yard line and anything inside of that is cash.

5. Will Likely Is Your Mother’s Favorite Player 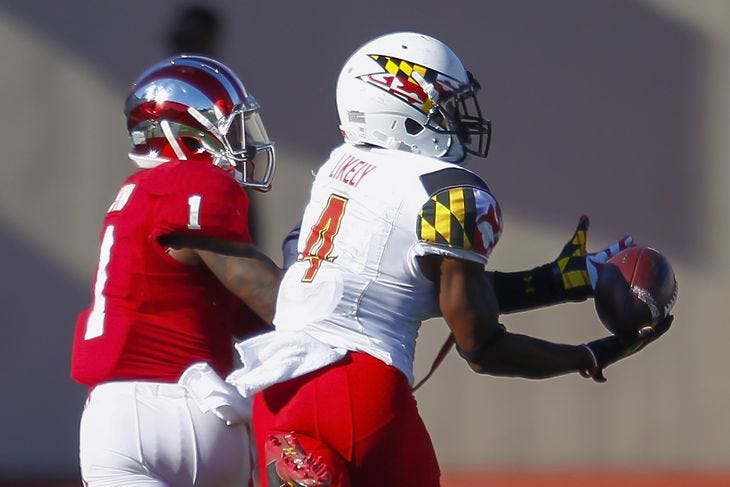 Here’s what I wrote last year:

The secondary is capable and will hold its own, but I want to talk about my boy Will Likely for a minute. He is ferocious. At 5’7, 175 lbs, but he plays 6’5. Extremely exciting to watch. He’s your typical undersized athlete with a chip on his shoulder. Flies around the field and knocks the big boys on their asses. Had a big year last season as a freshman, and terrorized the opposition in the return game after Diggs got hurt. Kicks and punts were Stefon’s domain early last year, but I think it’s all Will, all the time now. And he’s only going to get better. Be afraid B1G boys.

Every word of that remains true and he’ll probably win a football game this year with a return TD and another with a pick 6. He had 6 INT’s last year yada yada yada, it’s Friday before Labor Day Weekend, no need to say any more so I’ll just let this fantastic clip do the talking.

6. The Schedule Is Tough After Week 3 But The Terps Will Win Games 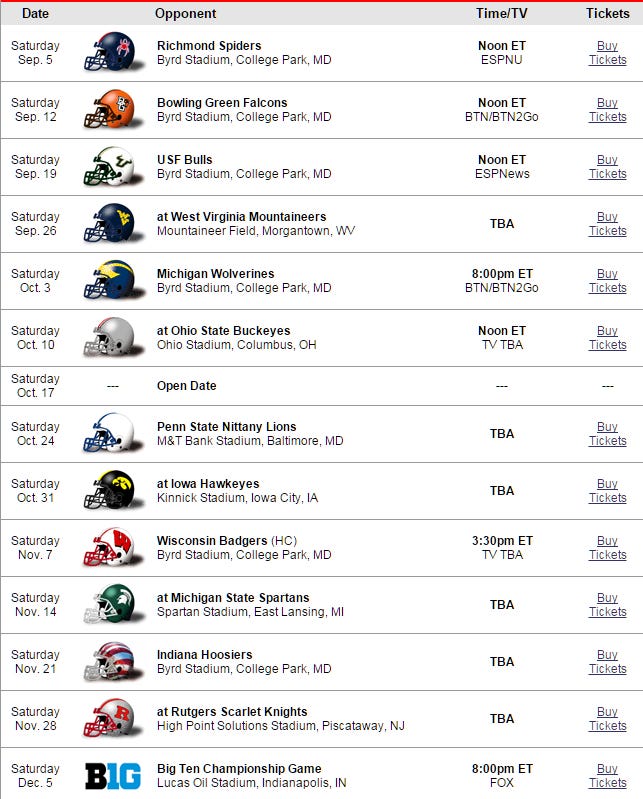 The Terps will coast through those first 3 weeks and head into Morgantown at 3-0. From there on out, they’ve got their hands full just about every week. We can chalk up Ohio State, Wisconsin, and Michigan State to disgusting losses. I don’t feel great about that WVU game. So really, these 5 games are make or break for this Terps team.

Penn State: Hackenberg is a bum, most overrated QB in the history of history

@Iowa: CJ Beathard, nearly as much a bum as Hackenberg

Indiana: Steamrolled em in Bloomington, will be even uglier in  CP

So yeah, that’s 8 wins right there. And you know what? Fuck what I said. We’re taking down Sconny for Homecoming while we’re at it. 9-3. Mark it down. 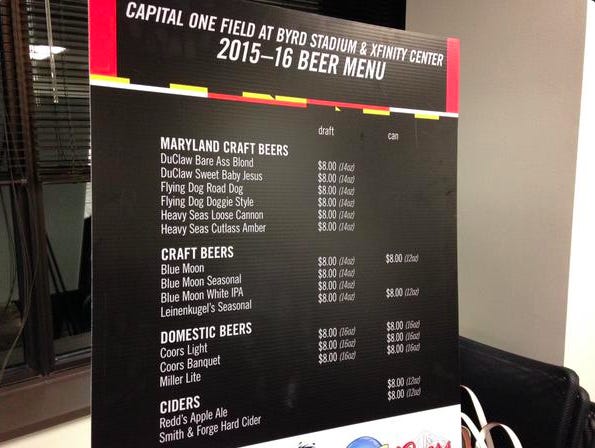 Fantastic. It’s been covered here throughout the process and it’s really happening. Oodles and oodles of Loose Cannons for your boy when his absurd Terps prediction falls flat on its face. No matter. We’ve got beers, we’ve got the illest uniforms out there and we’ve got the finest flag in the nation. We’re winning off the field and that’s what matters most, right? So cheers to basketball season in College Park!