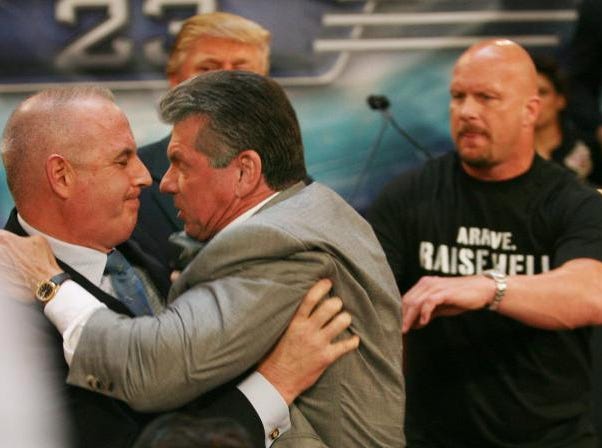 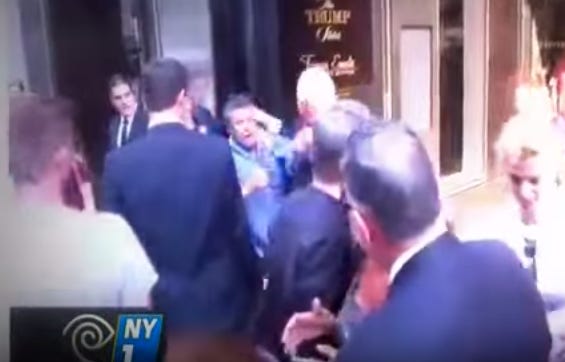 NYDN – A top security guard for Donald Trump smacked a protester in the face after the man chased him for snatching a banner Thursday, video shows. The guard grabbed the blue sign that said “Trump: Make America Racist Again,” a play on the billionaire’s campaign motto, NY1 Noticias video shows. Demonstrator Efrain Galicia ran after him and appeared to reach for the banner and grab the guard from behind. Within seconds, the guard turned around and whacked him in the face with an open hand as a scrum of reporters snapped photos. Galicia stumbled as another guard tried to restrain him, appearing to briefly put him in a stranglehold. Galicia fought back, grabbing at the second guard’s arms before the two yelled at each other outside Trump Tower. The first guard was identified as Trump’s longtime director of security and bodyguard, Keith Schiller, by the Daily Caller. After the 10-second tussle, Galicia told reporters the guards are “just acting like their boss.” “This man thinks he can do whatever he wants in this country, and we’re going to stop him,” Galicia said in Spanish. He compared the incident to the Univision anchor Jorge Ramos getting kicked out of an Iowa news conference last week for asking questions without being called on. The security guard who forcibly removed Ramos looks like Schiller, a retired NYPD detective and a US Navy veteran, according to his LinkedIn profile. He’s been with Trump for 16 years and was photographed restraining Vince McMahon of the WWE when he tried to attack Trump at a match in 2007.

Trump’s muscle just absolutely emasculating these Mexicans. Ragdolling them. That guy getting an open hand bitch slap upside the head was the most mortifying moment in protest history. I havent seen a Mexican embarrass himself like that since Eddie Guerrero’s heart attack in the middle of Smackdown. Maybe this shit flies with other Presidential candidates but not with The Donald. You wanna wear KKK outfits and make signs about racism and block the sidewalks? Do it to that pussy Rand Paul. I bet he doesnt have any bodyguards who have fought Vince McMahon. But if you think you have the right to peaceably assemble and petition the Government for a redress of grievances on a public sidewalk well then you are sadly mistake. Trump doesnt fuck around with that nonsense. He’ll release the hounds on your ass. Probably saw them out there causing some sort of Hispanic Hoopla and gave the order. “Go slap around those illegals.”

I mean if I’m a protestor I’d rather get knocked the fuck out with a closed fist punch. At least that means the bodyguard respects you. A bitch slap is like swatting a fly. Its just mocking these Mexicans pouring out their heart and soul at their rally. I guess just consider yourself lucky for not being deported and take your bitch slap and get back to manual labor.