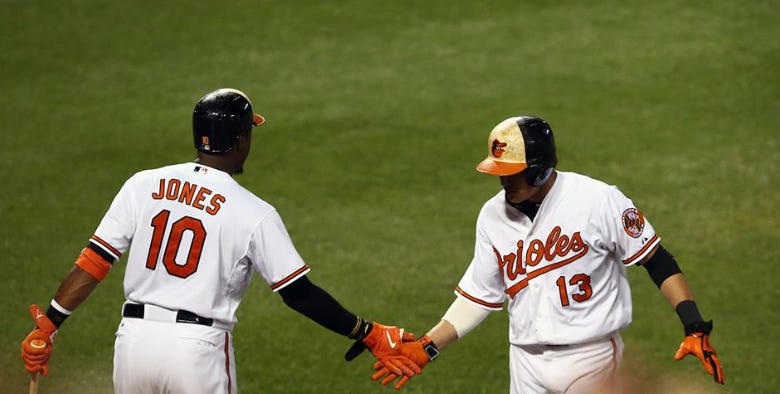 What to say, what to say? The O’s continued their losing ways this week. After being swept by Texas in embarrassing fashion, the Birds came home to face the Rays in a must-win situation. Like clockwork, they lost the first game, got absolutely bullied on the night they celebrated the anniversary of Cal Ripken Jr’s streak, and just when we think they can’t sink any lower, on the verge of losing their eighth game in a row, they walk it off in the 11th on a Chris Davis moonshot. That walkoff win gives the O’s a 1-61 record when trailing after the eighth inning according to Roch Kubatko.

They went 11-18 in August, and now sit at 64-69, 12 games back, yes, 12 games back of the Blue Jays and only three games up on the Red Sox for last place. Won the division by 12 last season, down 12 now, such is life. Them shitting the bed last month also caused them to slip below teams such as Cleveland and Tampa in the wild card race. I’m trying to stay optimistic, but it’s not looking good. Being 5 games under .500 on September 4 doesn’t usually get you anywhere. 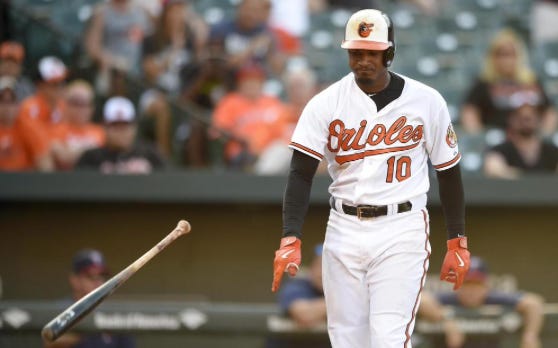 What Went Wrong In August?

Pitching hasn’t been much better. Check out the ERA’s of the starters after the All-Star break, Tillman (3.93), Ubaldo (7.50), Chen (4.62), Miggy (6.04), and Gausman (4.39).  Miggy and Ubaldo have really struggled to get deep into games. These 5 inning starts are getting old, and it’s wearing on the bullpen. It just came out that Miggy has been going through elbow and shoulder injuries, and he may make a stop on the DL, but doesn’t really need to with expanded rosters. I don’t think he should pitch the rest of the year. I would’t be surprised if he wasn’t on the team next year as well. He’s gone 6 innings or more only 3 times in his last 11 starts. Gonzalez was a bulldog for the Birds the last few years but this year he has been arguably their worst starter outside of Bud Norris.

That type of pitching is what you get when you think you can contend with a group of 3’s and 4’s (see also Red Sox, Boston). DD has to make it priority #1 to go get a proven starter in the offseason, as trotting out Ubaldo, Tillman, and maybe Gonzalez next year isn’t going to cut it. 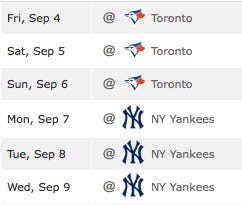 The schedule doesn’t get any easier coming up, with a 6 game roadie at Toronto, and then on to New York. The O’s haven’t played the Jays since June, and both teams were different. O’s were hot, and Jays couldn’t pitch. Things have obviously changed. Jays are the hottest team in the MLB over the last month, and don’t look to be slowing down. This could be an ugly series. The Yankees have come back down to earth a bit, but are still sitting comfortably in a wild card spot. This is a more winnable series than the Toronto one, and I’d love nothing more than to play spoiler and do our best to keep those guys out of the playoffs.

Overall, the Orioles have 29 games left, even if they go 20-9 the rest of the way, thats only 84 wins. Doesn’t guarantee a spot, and let’s be real, 20-9 is nothing short of a miracle. There are also only 6 games left against teams who aren’t in the wild card race. Schedule includes Toronto (@-3, home-4) New York (@-3, home-3) Kansas City (home-3) Boston (home-3, @-3)  Tampa (@-4) Washington (@-3). Said it last week, Buck won’t let these guys quit. Plenty of men still playing for a spot or a contract next year. That being said, the schedule to finish out the season is rough, and in the blink of an eye they can find themselves in last place, 15 games under.

Is it frustrating to see the team not live up to their talent and expectations? Yes. We won the fucking AL East by 12 games last year. But would you rather have this team play slightly below .500, or be stuck with the 2002 team that lost a billion in a row after the All-Star break? No Orioles fan is content with where the team is right now, it’s good that people are fiery and upset. This time 7 years ago, radio stations had been done with the Birds for weeks and it was all football. It’s September and people are still talking baseball on 105.7. With an actual GM this offseason, and a good amount of money to spend, the O’s can easily bounce back next year and show us a repeat of 2012 and 2014. Lock up Davis, bring back Pearce, O’Day, and Parra, go get a legit starter or 2, and they’re right back where they should be next year. But first, if the O’s aren’t gonna make the playoffs, why not play spoiler? Start it off by taking this series in Toronto. 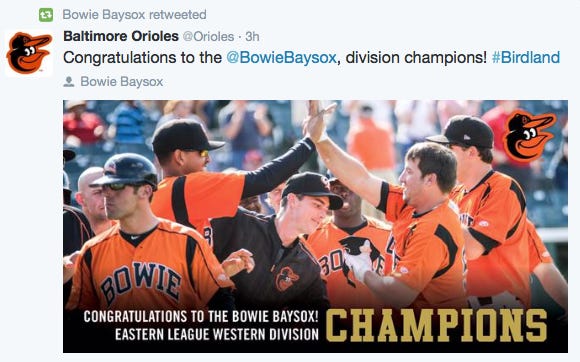 A big congrats to the Bowie Baysox, the O’s AA team, for winning their division last night. Start getting used to hearing the names of the young guys down there, Mancini, Latimore, Yastrzemski, Glynn Davis, Corbin Joseph, they’ll be up in Baltimore pretty soon, lots of talent and stoolies in the O’s minor leagues. Now go win the whole damn things boys!