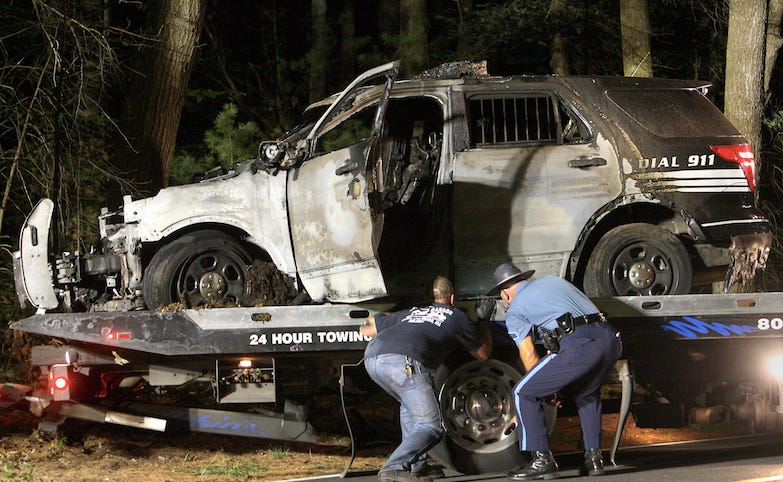 (Source) – Police in Millis, Massachusetts, spent hours on Wednesday searching for a man who shot at a moving police cruiser, causing its driver to crash and the cruiser to catch fire. Today, the Millis Police Department said it believes that the officer who reported the shooting concocted an imaginary story about an attack after shooting at his own car. “My cruiser’s been shot at. I’m at Forest Road. It’s going to be a dark maroon pickup,” the officer, who has not been named, radioed yesterday afternoon, WCVB reports. He stated that the pickup driver fired on him as their vehicles approached each other from opposite directions, and that he crashed while attempting to avoid the gunfire. Schools in the area were closed today as a precaution, and local and state police sent SWAT teams and helicopters on a search for the alleged gunman, according to the Boston Globe. The officer who allegedly perpetrated the bizarre hoax works full-time as a dispatcher and part-time as an officer, and was hospitalized at Norwood Hospital and released Wednesday evening. Police said today that he will be fired from his job and may face criminal charges. Millis Police Department spokesman William Dwyer said that the only ballistic evidence found at the scene of the shooting was “that belonging to the part-time officer,” and that investigators concluded he’d shot at his own cruiser after interviewing him and “as a result of all other evidence.”

I thought I should mention this today. Some cop in Millis faked that he was attacked, shot at, crashed his car and apparently had the thing blow up. All I have to say is BRA-VO. That’s how you pick your spot. Any other day and some cop filing a false report that leads to a manhunt and schools being shut down to find this rogue gunman and you’re front page news, but today? You’re a blip on the radar. An afterthought. Barely anyone talking about it. I almost didn’t even hear about this fucking thing. Well done, officer. Very well done. Worst case scenario this is like page 100 in the paper tomorrow.

However, if I could give a piece of advice, don’t fire your own bullets into the car. Ballistics are a thing, you should know that.