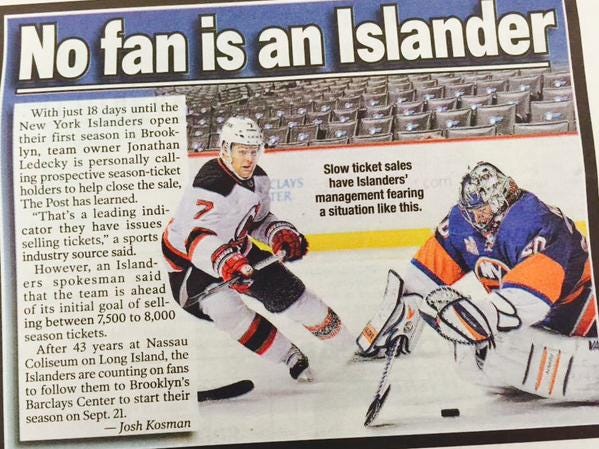 Where do I even start? $5 Photoshop of empty seats in the background? Check.

Nabokov in net a year removed from the team? Check.

Incorrect number of days until the season starts? Check.

According to Brett Yormark, CEO of the Barclay’s Center, apparently not.

I may be the new guy at BSNY but even I know we aren’t the most ethical of journalists… or anything close to journalists for that matter, but man oh man did the Post set the bar low on this one. Can’t really put anything past the people at the NYP nowadays as they’re slowly transitioning into the New York Inquirer.

I want to be mad about one of the New York’s biggest papers borderline slandering the Isles reputation within the city, but hey, only big time teams are the target of big time libel, right?

Of course, Yormark could just be saving face with his response, but if there’s one thing I’ve learned in my short time at Barstool it’s that numbers never lie.