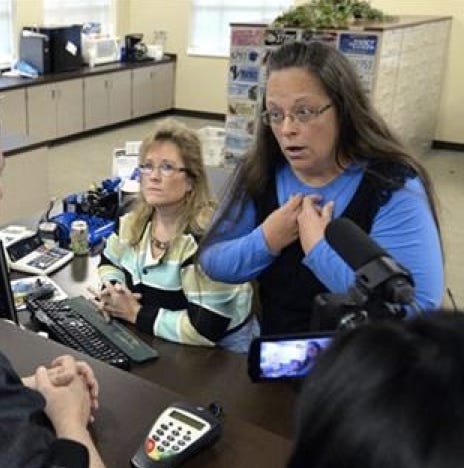 (MOREHEAD, Ky.) — Kim Davis sat in a church pew on a Sunday morning about four years ago, listening as the man in the pulpit preached of forgiveness and God’s grace. Davis until then might have seemed an unlikely candidate to wage a moral war over the institution of marriage. She has acknowledged through her attorney that she had made “major mistakes” before she was born again. But that Sunday morning, as the preacher spoke from the book of Galatians, Davis — then 44 years old — repented and pledged the rest of her life to the service of the Lord. Now as the Rowan County clerk, Davis is refusing to surrender in a battle over who can and can’t be wed. She invoked “God’s authority” Tuesday as she defied a series of federal court orders and once again denied marriage licenses to same-sex couples.

This horrible human is in the news an awful lot right now because she’s a county clerk in, you guessed it, Kentucky who refuses to give marriage certificates to homosexuals (you know, like the law says she has to). Everyone is calling her a disgusting bigot and all that, and they’re totally correct.

But damned if I don’t get a kick out of her.

I love crazy, that’s known. This Kim Davis chick? She’s batshit. She’s a loathsome, offensive brute yet I can’t look away. Want me to say that I don’t find this old hag funny? Sorry, can’t do it. Won’t do it. This chick has been married FOUR times and refuses to give gay people marriage certificates because it offends god and ruins the sanctity of marriage. She’s just sitting there telling every gay person to go to hell (literally) and refusing to do her job. You gotta kinda respect that. Imagine just saying “No.” whenever your boss tells you to get to work and still staying employed? That’s the dream right there. Senators want me to issue these licenses to homos? Sorry, you don’t sign my paycheck. God does.