First cuts were this week so of course we started the practice with the age old Hard Knocks speech about wanting it yourself. Don’t do it for me guys, do it for yourself, do it for your wife and kids, I love these 90 guys but we have to make cuts, if I could keep all of you I would but I can’t blah blah blah.

Only thing that made this played out speech better was Bill O’Briens insistence on getting juice. Need more juice. Gotta have the juice.

Which then led to the not so subtle move of HBO zooming in on JJ Watt chugging juice. That’s the juice baby, JJ’s juice.

JJ then went on to give a speech to a rookie about how he sleeps for 10 hours a night and his life sucks because he trains so hard. My biggest strength? Work Ethic. My biggest weakness? Sometimes my work ethic makes me work too hard, like that time I got my body fat so low I had failed myself. Yes you can be TOO in shape, just ask JJ. 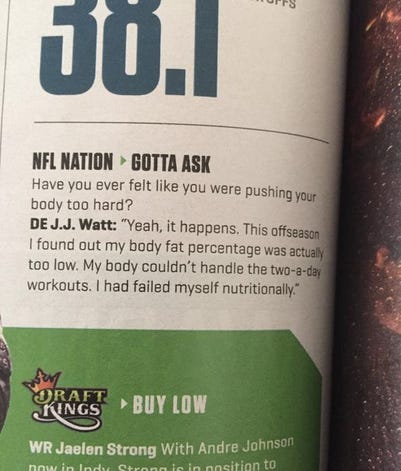 We then moved on to my favorite portion of Cut episode. When they start showing some random no name player in a case of foreshadowing that a 5 year old could pick up. This year it’s Travis Labhart and his best friend EZ Nwachukwu. Oh my god, which one will they cut? The skilled fast guy or the white guy that looks like he’s 35? I can’t wait to find out!!!

I didn’t say anything, he did.

Best moment of the week besides big Vince was without a doubt Brian Cushing trying to spell Opportunity with an E, Oppertunity. Absolutely blew his mind that it wasn’t Opper. He is the world’s greatest meathead and I love him to death.

Turns out no one can really spell on this team. Guess that’s what happens when Ryan Fitzpatrick leaves town (he went to Harvard, ever heard of it?)

We also got another great glimpse of real JJ when Vince Wilfork was basically like “dude, get the fuck away from me and stop talking just because we’re being filmed and you’re trying to be everyone’s friend”.

JJ 100% is obsessed with Vince Wilfork being naturally funny. Probably sits up at night thinking “How does he do that? How does he just make people laugh like that? I need to learn his ways so I can end up on PTI”. Just kidding, JJ sleeps 22 hours a day, he’s half mountain lion, half football player. Gotta keep the body fueled, bro.

As for Vince and his sense of humor. By far the best moment of the night, the overalls. Like I’ve said in weeks past, Vince Wilfork can do just about anything at this point and I will die laughing.

Bill O’Brien not realizing Vince was behind him was so good.

“I’m going to kiss you bro, but not in a Gay way, it’s just all about intensity, ok”

This is why you’re a 3rd string quarterback, Tom.

Like I know we’re already winning so me saying let’s go win it wasn’t exactly right but you get it, let’s win more than what we’re already doing. I’m totally paying attention, I swear.

One of the best moments of the night and one of the best stories on the team is Charles James. The do everything guy running for an 80 yard touchdown only to have it called back for holding. He still kept the game ball though, literally gave it to himself for a play that didn’t even occur. Sav move.

Finally, cuts. Look we like what you brought to the team and we think you can play,  it just isn’t the right fit with the roster we have. We loved your work ethic and athleticism, you need to get better on the mental part of the game but you can do it if you WANT it. Take this as a building block and get better. AKA, you stink bro, hang em up.

Oh and if you were wondering who got cut between Travis Labhart and EZ, yup, it was the 24 year old white guy who looks like he’s 40. Seriously, he’s 24! When I first saw him on the screen I just assumed the Texans had signed Brandon Stokley. 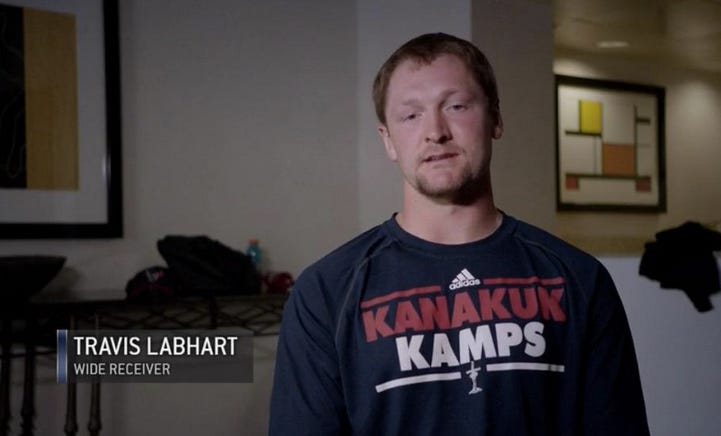