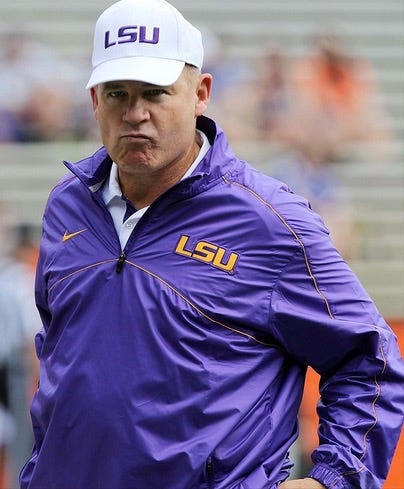 “Rumors of my demise have been greatly exaggerated,”Miles paraphrased before talking about football and his game plan for Saturday’s contest with the McNeese State Cowboys.

Miles discussed his hospital visit in a Monday evening news conference. Hours earlier, he returned to campus after briefly going to the hospital. As he returned, Miles said he had “OD’d on coffee,” but was fine.

He attended practice upon return to LSU. But, he missed his lunchtime press conference, which had been scheduled for 12:30 p.m.

Miles said he was at work Monday morning when he started to feel under the weather, and had the trainers on staff check him out. They recommended he go to the hospital to be fully checked out, and Miles drove himself.

“I had too much coffee. Whatever it was, it was absolutely too much,” he said. “I went six months where I didn’t have a cup of coffee. I slowly but surly worked it back into my diet. I now remember I didn’t really get along with coffee.”

I know I’m obsessed with Saban and I play that up on the blog a lot, but I genuinely love Les Miles. Ever since I watched the ESPN segment where he drove Kaylee Hartung around and told her how he eats raisins for breakfast every morning while casually running red lights and refusing to wear a seat belt I was hooked. Just the fucking best.  One of the strangest, weirdest dudes you’ll ever see win 120 games and have a team consistently ranked in the top 10.   The idiot savant of college football.  Just straight housing grass, extrapolating on his breakfast routine and running red lights like he just DGAF.   The anti-Saban in every way and perfect foils for each other.  Pure entertainment from the time he gets out of bed til the time he takes the visor off and puts the grass down and goes to sleep. So to say I would be devastated for Les Miles to drop dead from a coffee overdose would be the understatement of the century. Need this guy around for a long, long time.