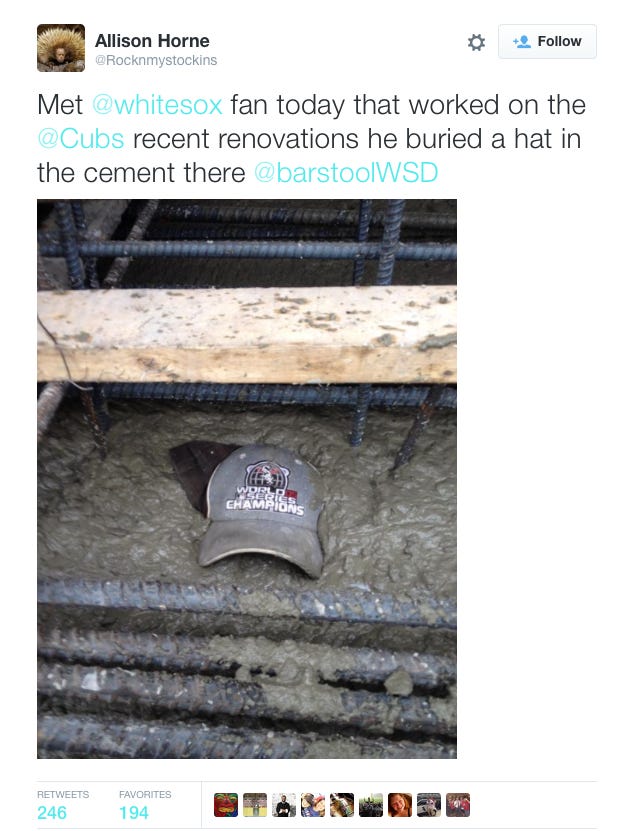 CHICAGO (FOX 32 News) – South Side baseball fans may consider it a prank. North Side baseball fans might call it sabotage. Cubs and Sox fans are currently reacting to a picture that surfaced on Twitter over the weekend that allegedly shows a White Sox cap being secretly buried in concrete at Wrigley Field by a Sox fan construction worker.

There’s an army of construction workers at Wrigley Field, still, as the landmark ballpark continues its $350-million dollar renovation. But is there a traitor in their midst? On Sunday, sports blogger Allison Horne tweeted a photo with the caption: “met a White Sox fan today that worked on the Cubs recent renovations he buried a hat in the cement there.” Not just any hat, a 2005 White Sox World Series championship hat.

The post doesn’t say where or when the hat was buried, but Horne told FOX 32 that she knows the photo is legit. FOX 32 showed the tweet to Cubs fans outside Wrigley. “A true Cubs fan, it would bother them a lot,” a woman said. “Yes,” the woman responded. “Because it’s Cubs and Sox. It’s a rivalry. This is our stadium and there shouldn’t be any Sox stuff in there.” “Shows maybe a little bit of jealousy also,” one man said. “I think they should retaliate somehow, the Cubs. They need to do something,” another man added. A spokesman for the Cubs says they won’t do anything because they doubt the picture is legit.

Cubs President Theo Epstein was more to the point when FOX 32 asked him about the cap controversy as he walked past the park. He told me–quote: ‘I couldn’t give two….’ Well, I can’t say that word but it rhymes with hits.

And Theo sums up every true Cubs fans feelings perfectly. Forget the lady they interviewed or the guy saying we should “retaliate”, those people are weirdos. Because guess what, I don’t give a fuck about this hat being buried. Not only that but I guarantee the guy who did this probably took the picture then picked the hat out of the concrete immediately after. You think he wants to lose his job and have OSHA up his ass? Fuck no. It’s a gag, a joke, a shitty one that doesn’t bother me whatsoever, just like the White Sox in general. I’ll give WhiteSoxDave a ton of credit, he fully admits his hatred for the Cubs is borderline irrational little brother syndrome and I respect that he owns it every day of the week, but the reality of the matter is that most Cubs fans just don’t care about the White Sox the same way White Sox fans feel about Cubs fans. I’m not even trying to do the tough guy I don’t give a fuck act and I know the Sox have won a World Series this century, it’s just that our rival is the Cardinals, that is where all my hatred goes. When we play the Sox 6 games a year, sure I’ll get a little extra juice flowing but the other 359 days? They’re never on my mind. I hated AJ, I hated Ozzie for calling out Wrigley and Cubs fans, and I wish our park had the same quality food/beer as the Cell, but other than that I’m sort of apathetic on the Sox in general. That’s just speaking honestly, because just like Theo said, I couldn’t give two shits.