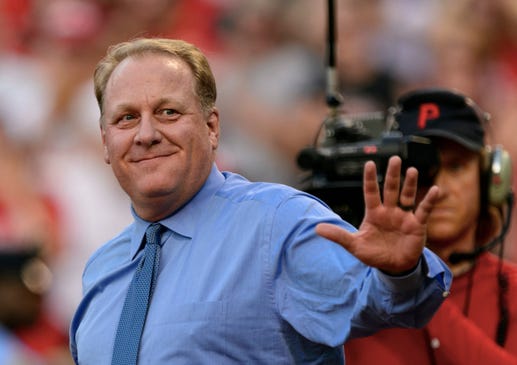 So Awful Announcing posted this email exchange with Schilling. Honestly, most of it is a real snooze. Two old people arguing about their families, religious beliefs, what sports teams they root for, what’s offensive and what’s not, all kinds of bullshit. Really, nothing of interest at all.

Except for that line right there.

Get ‘em, Curt! Fuck Chris Mortensen! He makes shit up for pageviews when they’re the “flavor of the day!” He’s a lying scumbag, mouthpiece for the NL! He’s arrogant and refuses to correct false reports, even going so far as to say he “stands by them.” Imagine how it must feel to be Chris Mortensen reading that? There was a day when he was the most respected NFL reporter in the business. He was the man everyone went to for the real scoop. Now? He’s a laughing stock. His career is all but over. Mort can tweet a known fact like “The football team in San Francisco is called the 49ers” and he’ll get thousands of responses saying “So their name is anything but the 49ers?” He has zero credibility anymore and has guys under suspension for tweeting Nazi memes and walking around the house in Nazi jackets acknowledging the fact that he’s a joke.  Has to sting. But, at the end of the day, it still gets Curt entry back into my club. You can lose millions of taxpayer dollars and try and disprove evolution and tweet all kinds of racist memes, I don’t give a fuck about any of that. All I want to know is where you stand on Deflategate, and Curt stands with us.