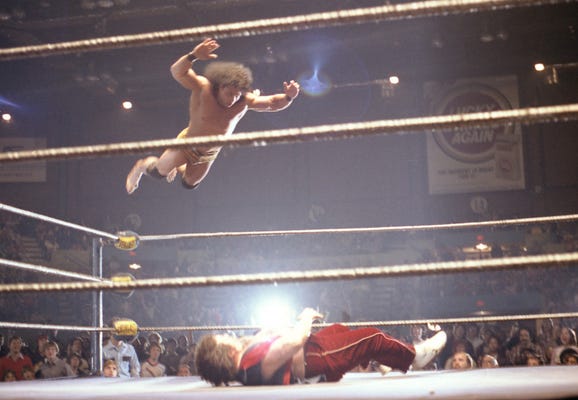 Courant - Wrestling legend Jimmy “Superfly” Snuka is being charged with third-degree murder and involuntary manslaughter for the death of his girlfriend more than 32 years ago in an assault at an Allentown area motel, Lehigh County authorities said. The charges were announced at a news conference Tuesday afternoon. Snuka, 72, was arrested Tuesday morning at his New Jersey home and arraigned at 1:50 p.m. from the Lehigh County Central Booking Center. He was sent to county jail under $100,000 bail.  Lehigh County District Attorney Jim Martin re-opened the case last year, prompted in part by a Morning Call investigation that raised questions about the death of Snuka’s 23-year-old girlfriend, Nancy Argentino, in May 1983. The Call story revealed a never-before-seen autopsy report that labeled the case a homicide.  At the time of Argentino’s death, Snuka was one of the World Wrestling Federation’s biggest names, known for his high-flying finishing moves. Snuka originally told at least five people, including the responding police officer, he shoved Argentino earlier that day, causing her to fall and hit her head, according to police interviews obtained by The Morning Call. He later told police those five people misunderstood him, and said Argentino slipped and hit her head when they stopped along the highway to urinate. In 1985, the Argentino family won a $500,000 wrongful death case against Snuka by default, but Snuka never paid because he claimed he was broke and couldn’t afford a legal defense. In his 2012 autobiography, Snuka maintained his innocence and said Argentino’s death ruined his life. “Many terrible things have been written about me hurting Nancy and being responsible for her death, but they are not true,” he wrote. “This has been very hard on me and very hard on my family. To this day, I get nasty notes and threats. It hurts. I never hit Nancy or threatened her.”

Yikes. Things are not going too well for WWE recently. They’re running out of legends. Whenever WWE talks about guys of the past, it’s always Andre the Giant, Bruno Sammartino, Jimmy “Superfly” Snuka, and of course Hulk Hogan. And as it turns out, one guy is a racist and another is a bit of a murderer. Goes well with yesterday’s news that Seth Rollins’ girlfriend is a Nazi. What’s next? Someone going to kill their entire famil….ummmm…nevermind.

PS: Ummmm, not defending him, but what’s up with statute of limitations? 32 years later? Can you do that? He’s like 100 years old now. Kinda seems like a “my bad” should do now, what’s the point of locking him up?