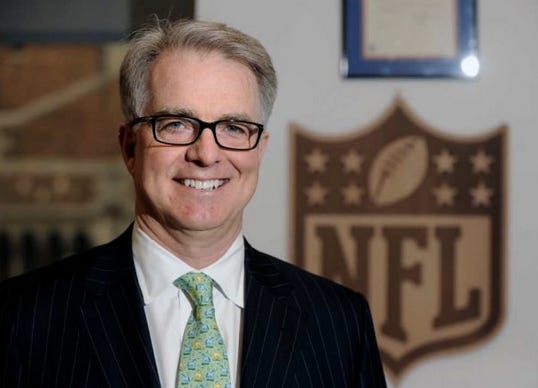 (Tom Brady is obviously the cool one)

(Source) — The NFL has had a rough year when it comes to public relations. And now a major change is coming to the NFL’s public relations department. Via Daniel Kaplan of SportsBusiness Journal, executive V.P. of communications and public affairs Paul Hicks is leaving the NFL. He’ll join the Glover Park Group, a firm that provides P.R. advice to the NFL. It’s not known whether Hicks will be working directly with the league. It’s also unclear whether Hicks chose to leave, was nudged, or feared that a nudge was coming. Some believe that the ultimate fallout of #DeflateGate won’t be a new Commissioner but a new structure beneath him — a process that apparently commenced with the hiring of Tod Leiweke to serve as the NFL’s Chief Operating Officer, a position that had been vacant since Roger Goodell had been promoted from COO to Commissioner.

Florio says that it’s unknown if Hicks decided to go on his own or felt a push coming, but that doesn’t really matter. The answer is he left because he’s smart. Either he’s way too stresed out trying to spin terrible PR moves by the NFL day in and day out and told everyone to fuck themselves, or he knew that when the Brady decision blows up in their face someone is gonna have to take the bullet, and it won’t be Goodell, so he told everyone to fuck themselves. Either way it’s the same reason: he left because the NFL is a corrupt bunch of scumbags and he doesn’t want to deal with it anymore. He’s tired of going into work everyday and figuring out how to spin Goodell’s web of lies to the American public. Tired of writing memos that Goodell didn’t know about the Rice tape that he clearly knew about and that they didn’t correct the misinformation of PSI reports because it was Wells’ jurisdiction. He’s probably been dreaming about this day for years and years, practicing his quitting in the mirror and writing vicious diatribes directed at Goodell in his head. But today was finally the day to pull the trigger. When you know Brady is about to win and you can already hear the “Why did you lie? Why did you waste million of dollars? Why did you spend an entire offseason chasing a ghost? Why did you attempt to make an example out of the face of the NFL? Why did your office continuously leak and refuse to correct false reports? Is Roger Goodell a human or a soulless monster?” questions coming, then you know that’s your day to get out.