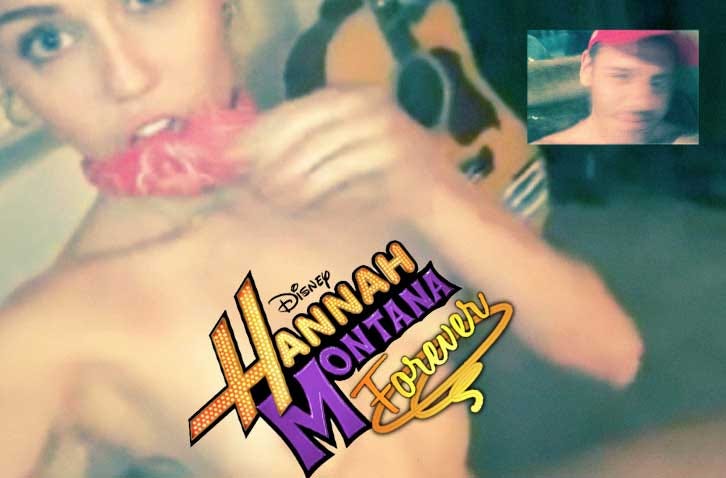 GossipCop – [Miley] Cyrus is one of several top stars who scored a cover for [Interview] magazine’s September “#Me Issue.” Forming the “#Interviewgang #Instagang,” celebrities like Kim Kardashian, Zayn Malik, and Selena Gomez each took a selfie for their own cover. Not surprisingly, Cyrus’ is the most risqué, showing the pop star lifting up her shirt by her mouth, exposing her breasts.

Cyrus’ additional shots for the magazine are even raunchier, and arguably pornographic. Taken during a FaceTime chat with photographer Mert Atlas, the singer’s bare boobs are visible in all of them. In one particularly graphic pic, she’s simultaneously lifting her shirt with her mouth and pulling down her panties with her hand, giving (an admittedly blurry) look at her most private area.

Miley Cyrus’s nipple gave the MTV VMAs audience a warm hello during Sunday’s telecast and now, just a few days later, here’s a clearer look in case you were jonesing for more. And the thing I’m confused by is how this Mert Atlas guy is getting any credit at all as a photographer. What did he really do here? He screengrabbed a couple shots of a chick nude on his iPhone. I’ve been doing that for years now on Snapchat and no one’s crediting me in a fancy magazine. And what else, he got Miley to FaceTime and pull her tits and vag out while he awkwardly makes eye contact? Big deal. Billy Ray Cyrus gets that every Father’s Day, too, you don’t hear him bragging about it. Such a Mert thing to do. Classic Mert.

I do have to say though that the nude screenshot thing is hot as hell no matter what the context is. I’ve seen Miley’s nipples as many times as my own this week and I’m still all in on the photos. Such a hot theme for a pic, same as a naked selfie getting texted or the aforementioned Snapchat ones. You Photoshop a countdown timer clock on the upper right corner of any generic hot pic and it’s like Mount Vesuvius within seconds. Great job by Interview Magazine there. Not Mert though. Still fuck Mert.

You can see the full NSFW photoshoot here.