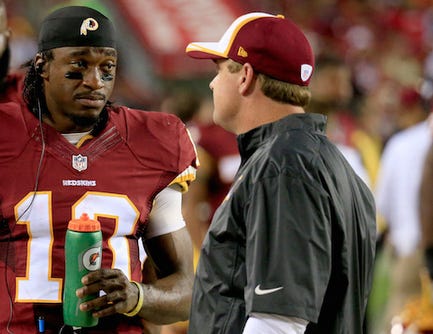 Yahoo – The best move for everyone at the moment seems to be for the Redskins to cut Griffin before the start of the season. Although it sounds crazy, anything else will just lead to misery for both Griffin and Washington’s front office. As Adam Schefter reported over the weekend, Griffin is owed $16 million next season, and that money is guaranteed if Griffin gets injured. As Schefter noted, because of how injury-prone Griffin has proved to be in his short career in the NFL, teams that might otherwise be interested in trading for Griffin are staying away because they don’t want to take on $16 million in guaranteed money if he is quickly re-injured. It’s one thing to risk an injury guarantee on a player you think can help you win games. It is something else to risk having to play a backup $16 million if he gets hurt in practice. 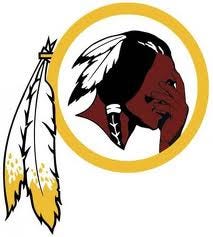 There are so many layers to this story, I’m doing my best to peel them all around the best I can. And this is one such layer that is going under the radar. At the beginning of this offseason, the Redskins picked up RG3’s 16 million dollar option for next year. When they did it I said all we can do is trust Scot McCloughan. I said RG3 is young, he completes a high % of his passes, and McCloughan knows what he’s doing. But now it’s blatantly obvious this was a Daniel Snyder move. And it’s really fucking the team now. It’s made Robert untradeable. No team (RIP Al Davis) is going to take on his 16 million dollar option for next year. If he gets hurt, they’re on the hook for the 16 mil. Nothing like paying a QB 16 million dollars not to play. And that’s reason 153 why they need to cut him. If he gets hurt playing vs the practice squad, they are so fucked. Jay Gruden has moved on from Robert Griffin. He tried to move on from him last year, he hates him. He wants to use his own guys to run his system. Not the owner’s bowling buddy.

The team needs to just get rid of him. There’s no salvaging this relationship. And if he isn’t cut, you know it’s because Dan Snyder is still running the show. Despite him leaking to the media that he’s letting Gruden and McCloughan do it, if RG3 is kept around, we know it’s because Snyder said so.