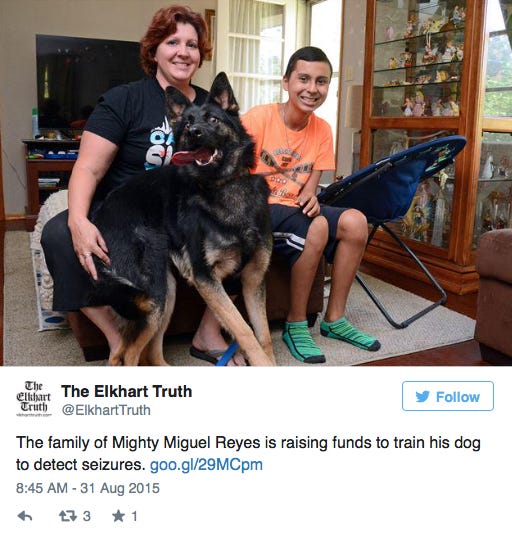 (Source) 14-year-old “Mighty” Miguel Reyes, a diehard Chicago Bears fan, was diagnosed with cancer in 2014. One of Reyes’ teachers, a Green Bay Packers fan, encouraged him to name the tumor in his fight against cancer. Reyes decided to call it “Aaron Rodgers.” Via The Elkhart Truth: “I said, ‘You need to name that tumor so we can kill it,’” Concord Junior High School teacher Peg Kelly said. “You know what he named it? Rodgers. Aaron Rodgers. What a stinker!”

Reyes has undergone 33 radiation therapy sessions, and has started to lose his vision and suffers from seizures. Reyes’ family is hoping to train a German Shepherd, named “Hester,” to help Reyes move around and alert people of his seizures. A GoFundMe fundraiser to help pay for Hester’s service dog training had raised $560 dollars before the Elkhart Truth published its story on Reyes August 30th, and in the last 36 hours has reached the $2,000 mark.

Love is a strong word but I love this kid. Bears fan, hates Rodgers, and an absolute warrior when dealt a really shitty hand in life. So let’s see if we can help him out. I’ve linked his GoFundMe Page at the bottom here, all the money goes to help train his German Shepard so the dog can in turn help detect  Miguel’s seizures. Dogs, kids, fighting cancer, and hating the Packers, I think we just hit Bingo for causes we can get behind. And I’ll fully admit, the Bears probably aren’t beating the real Aaron Rodgers this year so we might as well kick this Aaron Rodgers’ ass.