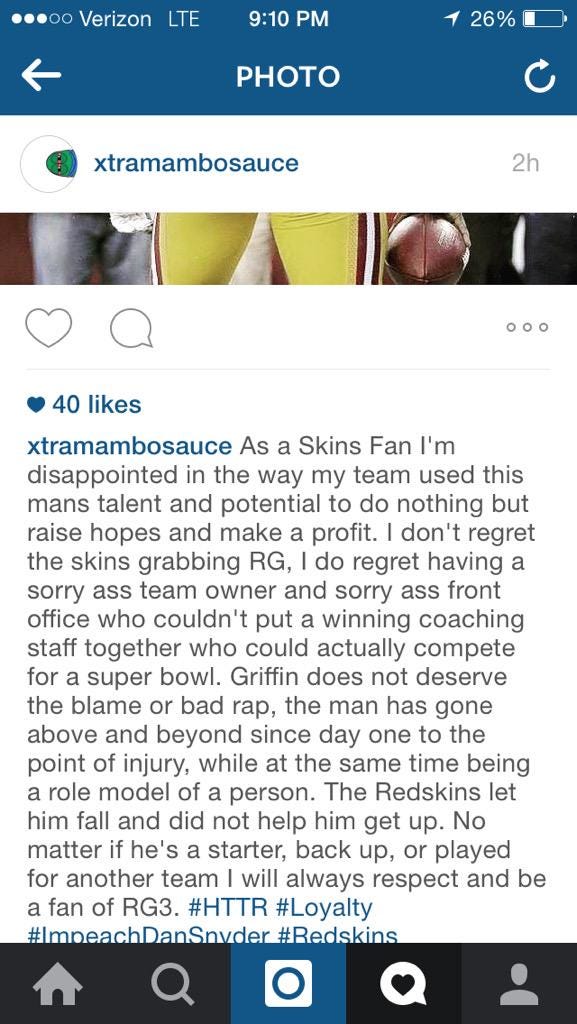 Ummm…I don’t think you can do that? If you have a real job you can’t click like on a thing that talks shit about your boss on social media. I don’t mean to Carrabis the guy, but come on RG3. It’s year 4. Learn how the Internet works.

And the biggest problem with this whole thing isn’t that it calls Snyder a sorry ass owner. Everyone knows that. I love that he clicked like on that, it makes me laugh. It’s that he has zero accountability for his play. Griffin truly believes the Redskins held him down and stopped him from succeeding. How in the hell is that possible? They fired coaches for him. They got him DeSean Jackson. They put up with his dad being on the field and in the locker room. The guy didn’t even learn to QB slide until last year. I mean come fucking on. Take a little bit of accountability and responsibility.

And it goes back to what we’ve been saying since day 1, get the fuck off of social media you petulant child. Enough is enough. Robert Griffin III cannot handle social media, volume 4,504,286.

I don’t know if this liking of this random Instagram picture is a big deal, but it really irked me. People have been fired for doing things like this in the real world. And he’s an NFL QB. Think about that. An NFL, professional QB doesn’t have the self control to not click like on a picture trashing his own team on Instagram. He has to go. Maybe he did it hoping someone would see it and it’d help him get cut? It’s definitely possible.

h/t @Sullkp9 for sending it first