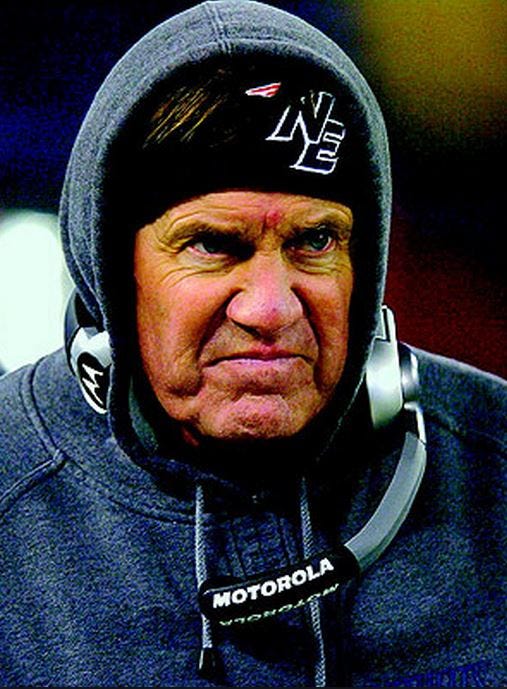 I just want to make one quick point here. I know it’s chaos in the streets right now. I know Goodell is the Devil. I know ESPN is the NFL’s Nazi propaganda machine.  BUT I want to clarify something. Don’t let my outrage or Pats fans outrage be confused with lack of confidence. If we’re speaking strictly from an X’s and O’s perspective I actually think this entire Deflategate thing is the best thing that could have happened to this team. Listen we were already swimming in Lombardi Trophies. There was basically nothing left to prove for this franchise. We’re the best. Everybody knows we’re the best. It’s been that way for 15 years. Unchallenged King of the Mountain. That’s how complacency sets in. Well you can throw that out the window.

Remember what happened after Spygate? We were a ball getting stuck in a helmet away from the greatest season in the history of sports. Well that ain’t shit compared to this. I can’t even fathom how Belichick is gonna use this in the locker room. The Pats are gonna come out with their hair on fire. Belichick is going to be shooting fireballs from his eyes. There literally isn’t a doubt in my mind we’ll be in San Francisco for the Superbowl and Roger Goodell will have to hand us our 5th Lombardi Trophy. I just hope and pray Mr. Kraft smashes it over his head when it happens. I didn’t think anything could top last year but when people ask me what the greatest day of my life is I’m already answering Super Bowl 50 because I know how sweet this will be. Nothing will be better than watching Goodell and ESPN eat crowe on that podium in front of Patriot Nation. They Hate Us Cause They Ain’t Us.