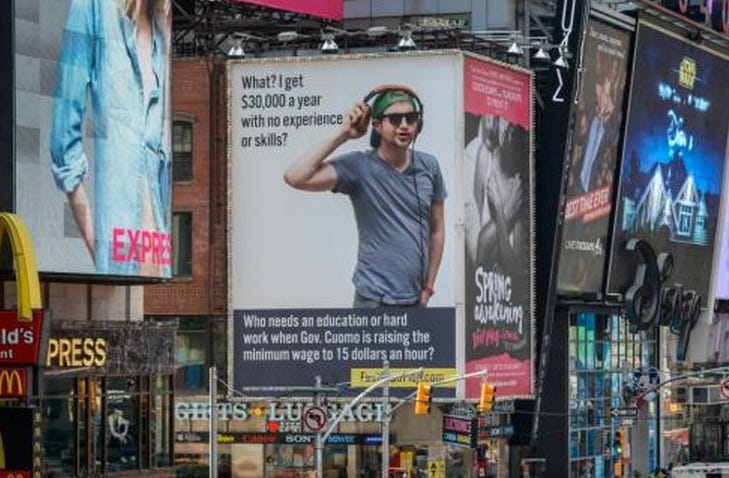 ALBANY — There’s more bad news for Gov. Cuomo at Times Square, though this time it has nothing to do with topless women. A conservative group has paid for a billboard ad on Broadway south of W. 46th St. attacking Cuomo’s push to raise the minimum wage for fast-food workers in New York to $15 an hour. The ad, which went up late Monday afternoon and is paid for by the D.C.-based Employment Policies Institute, shows a young man asking: “What? I get $30,000 a year with no experience or skills?” The text at the bottom reads, “Who needs an education or hard work when Gov. Cuomo is raising the minimum wage to $15 an hour.”mini A state board that Cuomo created recently recommended raising the minimum wage for fast-food workers to $15 an hour. Cuomo supports the plan, which is expected to be approved soon by his acting labor commissioner. The board was created after the state Senate Republicans blocked a push to raise the overall minimum wage, which is $8.75 an hour but is set to reach $9 an hour next year. The billboard ad, part of a campaign against the wage hike dubbed Fast Food Flop, will be up for a month, said Jordan Bruneau of the institute and along with a media promotion campaign will cost $100,000. The organization’s research director, Mike Saltsman, said the institute chose Times Square because “it’s the world’s billboard.” He said it’s a reminder that the $15-an-hour wage is a bad idea. “In a lot of ways, it devalues the hard work of people who have worked to get to that $15 wage.”

Listen I think the $15/hr wage for the McDonald’s people is as absurd as the next person with a real job. I think jumping from $8.75 to 15 is a fucking crazy jump. I think supply and demand will dictate this wage and there are plenty of super poor desperate people who can and would do this job for 10 bucks instead of 15. I’m pretty sure basic economic laws will probably dictate that where you used to have 2 employees at 9 bucks you’ll probably only hire one employee at 15 and so its still gonna piss these bums off one way or another. And I think its NUTS that there are teachers and nurses and other pretty important jobs that dont make much more than these guys would. When you’ve got a teacher who got their Masters degree making like 23 bucks an hour or a nurse who is in control of a fucking human life making like 27 thats completely fucked up. Obviously thats more money but not that much more than the idiots who are doing a job that is going to 100% be replaced by a kiosk eventually.

So thats why I hate this billboard. Because when you say it like “30,000 a year” instead of “15 an hour” it doesnt sound nearly as bad. Like when I hear $30,000 a year I’m like “Oh SHIT these people are BROKE.” When I hear 15 an hour I think these guys are flipping burgers and burning hundreds. Throwing fucking McDonalds parties rolling in cash. If I was some entry level marketing PR chick and I knew that McDonalds burger flippers were gonna make as much as me I’d pretty much kill myself. But other than that, if youre not one of those people, its like “Oh. Well. Thats not really that much.” So lets all stick to the hourly wage because that makes these assholes sound way worse than the yearly salary.